Plink, plat, plop, plink
This is the sound I woke up to this morning. My first thought was that this cabin was really creaky. I wish that was what was causing the sound. It was actually the sound of pouring rain.

I had a fun thought of tent camping for this trip for about 2 seconds while I was planning it. I am so relieved I discarded that idea. It would have been an adventure, but we would have been miserable!

The kids started to stir around 5:45am because of the time change. These two boys of ours can’t stop from goofing around and causing a ruckus. I’m chalking it up to some good sibling bonding-even as Ry tells them to knock it off because we know in another five minutes someone is going to get hurt.

We were ready well before our targeted time so the kids had a chance to watch The Lone Ranger and Father Knows Best before heading off to Mount Rushmore.

It was pouring as we pulled up to the gate and the fog was thick. After finding out that our $10 fee to park was good for an entire year, we decided to take a chance and see if the fog would clear.

We walked down the row of flags waving our umbrellas trying to avoid big puddles. We reached the end of the row but were unable to say for sure if there was anything in the distance because of the fog.

We went down the stairs and to the visitor’s center. There we watched a film and went through an exhibit. It was chalked full of information and we learned a ton! There weren’t many people there so we chatted with the rangers and asked them questions to learn even more interesting tidbits. Sylvia and Tyce filled in a Jr Ranger packet and were sworn in as Jr Rangers. I recorded them being sworn in and the ranger included some important items like swearing to eat all their vegetables. Sylvia dutifully repeated everything. Tyce was not as willing. They definitely learned a lot about what we came to see! The fog did thin out a little at one point so we had a quick viewing. 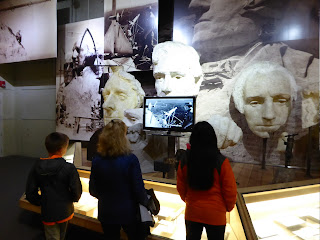 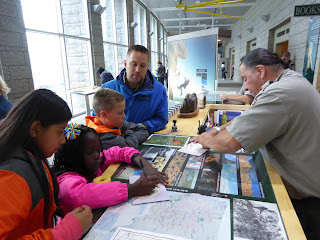 Our next stop was to Rush Mountain. It was 5 miles out of Keystone, but the drive was really pretty even in the rain. It is a small adventure park with a variety of activities. Because of the rain, only a few of the activities were running. The activity we purposely came to experience was one of them.

We chose to do a 7d movie. You sit in a seat with 3D glasses and a laser gun. The seat moves and wind blows at you so you actually feel like you are a part of what is happening on the screen. There were three different movies to choose from. In each you have to shoot either robots, aliens, or werewolves. We loved the first experience so much that we did each movie! We were also the only ones there. Ryan was the best shooter for all three movies, but I actually came in third twice! 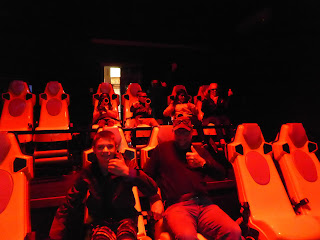 After our shoot em up game we drove to Custer State Park. I was hoping to do some hiking but the rain did not cooperate. We did eat a lunch under a pavilion at the visitor’s center of packaged tuna fish so that was a bit of an outdoor adventure! Miraculously not one of the children complained!

We drove the Iron Mt Road and Wildlife Loop. The scenery was amazing! Rocky forest terrain and then rolling hills of grass and flowers. We could see where a huge fire had swept through in December. You could see the devastation, but the colors and contrast it had created on the countryside was beautiful.

Our hope was to see the huge herd of buffalo. Apparently they were on the move today and they could not be pin pointed. We did see some of the herd up on a hillside however. 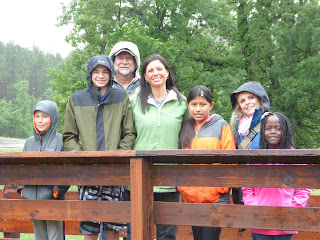 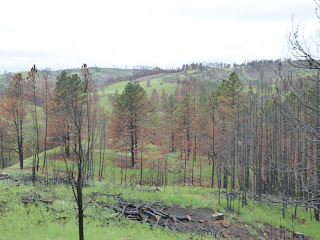 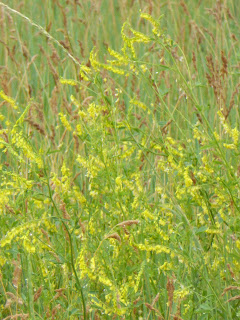 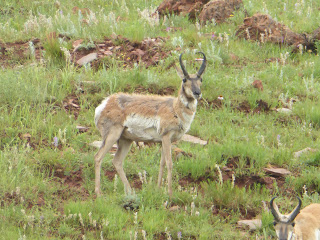 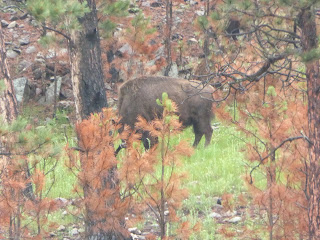 We also saw plenty of deer - even a fawn, many American pronghorn antelope, and turkey with babies, but the best were the donkeys! I had brought a bag of apples to feed them and we were lucky enough that we drove right into them! We got out of the car and they enthusiastically crowded us! The kids loved it! 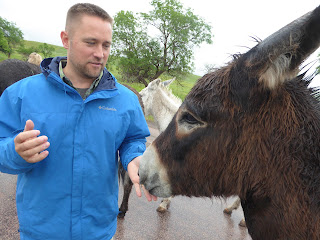 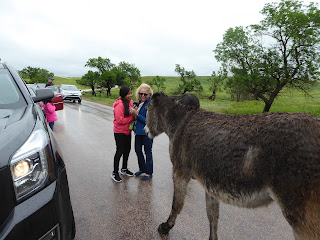 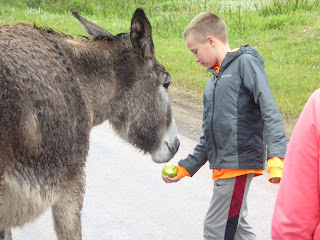 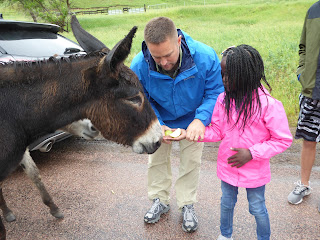 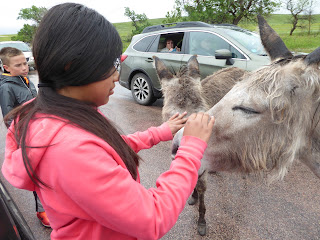 The kids also had a huge laugh as we drove the windy roads. Each time a vehicle was stopped on the side, you had to stop and look to find out if they were seeing an animal. The kids figured out quickly that if they pointed out of the window wildly people behind us would stop to look around. Thankfully my parents were in a car behind us so I didn’t feel so bad each time they did it and they laughed so hard that I didn’t have the heart to tell them it probably wasn’t too nice to do.

I had wanted to go on Needle Highway, but the kids were all switch backed out so we headed out of the park and went to Crazy Horse Memorial. It was half price, but that was because of the thick fog and not standing a chance of seeing it so we turned around and went into Keystone to the Presidential Wax Museum. We had free passes. It is very well done and very informational. The kids weren’t too into it but I would have liked the chance to listen to all the information they had to present. 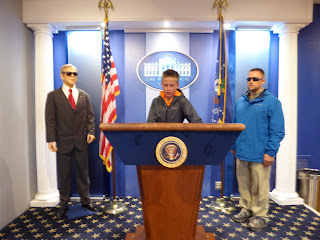 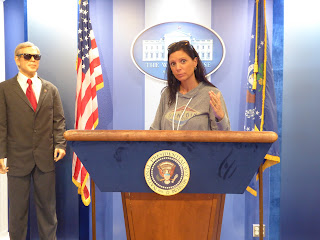 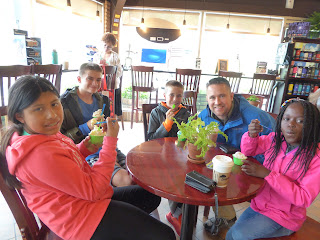 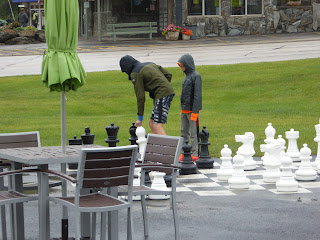 We ventured back to our cabin, had the kids change into suits and dropped them off with my dad to watch in the hot tub while we did laundry. Dinner was at the campground restaurant and then right to bed. I am thankful Ry and I have a separate room if only for the fact that the boys have such terrible gas! I swear a person could pass out from the stench! We have unrolled our windows and stuck our heads out regardless of the pouring rain more times then I can count!!