First Spin Class=Unable to Sit! What???

December 30, 2013
Back in September I stared exercise classes.  I am still going to classes and I am still wearing my old ribbed tank tops and not the "appropriate" work out wear, but that is ok.  I haven't run into anyone during zumba or cleared the room in a long time.

Last Friday for the first time I gathered up all my courage and tried a spin class.  I'm not going to lie.  I was scared to death!  I have never really ridden on a bike for an extended amount of time.  I prefer to get off of it to push it up a hill if needed while riding with the kids.  How in the world was I going to handle riding for 45 minutes!  Plus it sounded super boring!  Sit on a bike for that long without going anywhere!  Why in the world are these classes always close to full!?

I got a few pep talks from friends who are instructors and avid spinners.  Most of those talks only made me more scared as they stared throwing out vocabulary I had never associated with a stationary bike before.  In the end, I arrived a little early and introduced myself to the instructor and asked for pointers. 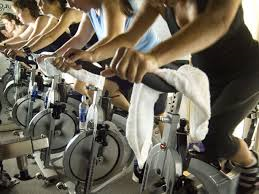 He got me set up on a bike (in the very front) which I didn't realize was so complicated!  Adjust the seat, the handlebars, the gears.  My head was spinning!  (LOL!  I kind of think I'm funny this morning)  The ladies next to me assured me I would love it and gave me more pointers.  I was a little more worried when I saw everyone had at least three towels draped on their handlebars.  This was going to be rough!

In the end, I didn't fall off my bike like I thought may happen in the middle of class.  I wouldn't have been able to talk to you in the middle of class, however, as I was concentrating on remembering to breathe so I wouldn't pass out and I was tempted to coast down the hills instead of put it in a lower gear and pedal!  I also found out I can sweat from my elbows and spinning was a very very intense workout!

Will I do it again?  I would like to, but my bum is in pain.  It isn't the good kind of pain after working out either!  My "sit bones" feel like they are bruised from the bike seat and the thought of trying to sit on that seat again when it hurts to sit on the coach is not appealing to me at the moment.  I made Ryan try it out this morning.  He didn't have much to say.  I really wanted him to share in my bum pain, but I don't think he would admit it fully even if it were true.  Something ingrained in men I suppose....
exercise spin class