Poop on the Parade! 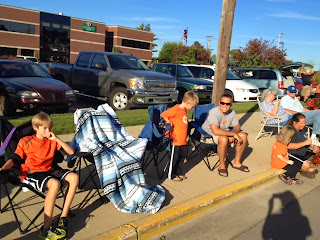 Our kids are too young for the dance and all of that stuff so we just enjoy the community coming together all dressed in orange and black for the parade down main street.

It was the Friday of Homecoming weekend and we found a suitable spot along the street, handed the kids bags to collect the candy, and waited for the festivities.  We love that we see so many people we know in the parade!  All of the sports' teams are represented as well as other extra curricular activities and groups. 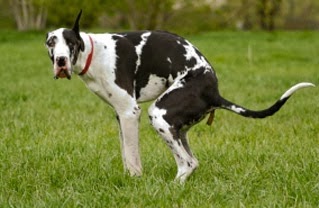 As we watched, we saw a HUGE great dane approach.  He was big enough for Tyce to ride as a pony!  Unfortunately, to the horror of his owner, he decided he needed to defecate right in the middle of the street in the middle of the parade!  Not much that could have been done and the parade went on.  We were directly across from his mamouth poops and the smell was unbearable!  You could hear the crowd groaning as they caught whiffs!

To make matters even more exciting, we tried yelling out to the parade participants so they would miss the steaming mounds ahead of them!  The first group of preschoolers to pass after the drop were lucky and we heard the little ones in wagons complain that it was "really stinky here"!

As the trucks and floats rolled through, there was no avoiding the fecal matter ahead of them!  We watched with anticipation paying close attention to their paths.  As the first tire rolled over one of the piles of stench, the crowd collectively groaned and the smell exploded into the air once again!  As each new group approached there was no avoiding the brown bomb now as it was spread every where over the road!  Participants in the parade looked puzzled as the crowd groaned and oh'ed as each new victim felt their print on the road. 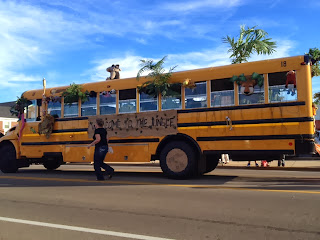 By the time the parade was finished, the smell had left with each tire and shoe that grabbed it off of the road!  The kids could only talk about the doo doo drop and paid no attention at all to the actual parade.  I have to admit I did the same thing!  Sure made the parade just that more entertaining filled with suspense!
dog poop parade