I'm NOT going to Jail! 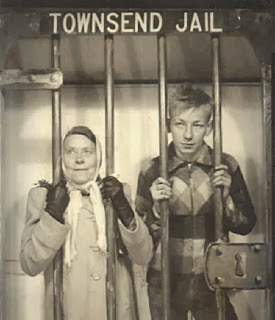 
And so began my first day of jury duty!

If you have never been summoned for jury duty in Michigan it is quite the process.  You can tell the people who run it all have done it for a long time.  There were signs up telling us where to go and explaining what to do.  I quickly found out that people do not take time to read.  There were three things you had to do before you could get your juror card scanned.  I filled in the forms and then went to get my card scanned.  I was amazed how many people had to be sent to the back of the line because they didn't fill in the forms or complete the three tasks!

When everyone was seated, the room was FULL!  One of the judges came in and explained the importance of our judicial system and having juries.  He gave us a little history and explained what courts we may be called to serve in and what cases we may encounter in these courts.

After he finished his talk, attendance was taken.  Our juror number was called.  You would think this would be a simple task, but apparently some people just don't understand!  There were people calling "here" to the number 22 when they had the number 222!  It was a bit frustrating for everyone involved!  The numbers went up to 456 and I was number 147.

The lady in charge of the potential jurors gave a run down of what was going to happen during the day and anticipated each question and stated the answer about five times when she first explained things and then stated the answers again later and still there were people who asked the same question!  Oh my goodness!  The judges should listen in on this room to start and just eliminate all of those people!  I definitely would not want them deciding my fate!

We were all given a bathroom break and then the selections started.  Each court/case gets a pool of 40 potential jurors.  Of course my number was picked in the first group!  We all headed upstairs.  Fourteen of us were numbered and seated in the jury box.  The others were asked to sit in the audience and pay special attention to what the 14 were asked by the judge and the attorneys.  I was in the audience.  After rounds of questions and jurors being dismissed I was called to sit in the box.  I said maybe 15 words and that was it.

Yes, I was one of the lucky ones to be kept on the jury.  I don't think they asked me enough questions!

The defendant was in the room looking pretty glum.  There was also a detective at the prosecution table who looked like a stereotypical TV "hot head" detective.  You know, the character who thinks he is all that and doesn't do things by the book.  I'm looking forward to hearing what he has to say and if he matches up! ;) 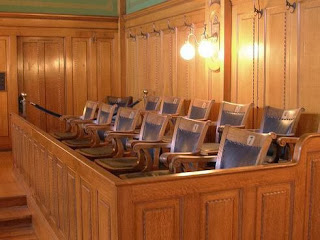 Tomorrow the real fun starts!  I'm very interested to see how it all plays out.
jury duty