Down to the Nitty Gritty in Court

October 30, 2013
After being selected for jury duty, the following day was where the real fun began!  As a juror we were to meet in one room, get our special juror badge, and then were all escorted to the jury room upstairs.

We were put in specific seats and the judge gave us each a handout which he read in court.  The handout contained information about what the case was concerning and its definitions.  It also contained instructions on how to ask witnesses questions.  That's right!  After the lawyers were done with them if we had questions we were able to write them down and hand them to the judge.  He would review the question with the lawyers and determine if it could be asked or not. 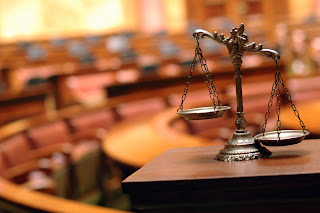 Sitting in the jury box was just like on television with opening arguments the calling of the first witness.  It was very interesting listening to the lawyers go through their questions. I thought it was very obvious what each one was arguing and what they would present for the case.  It was a case of home invasion.  The prosecuting attorney was presenting eye witnesses and evidence collected at the scene. (which I was stunned by all of the forensics they would do for this even with having eye witness accounts)  The defendant's attorney was trying to prove that the eye witness accounts were flawed because the man lived in the neighborhood and it could be that he was picked out of the line-up because he looked familiar.

After about an hour of testimony and numerous problems with the audio equipment we were all instructed to take a break.  I found it a bit ironic that one of the attorneys was hearing impaired and was having a hard time without the audio system (I taught kids who are hearing impaired in case you didn't know - so totally my cup to tea)  When all of the jurors were in the jury room some were questioning why the attorney couldn't hear things.  Of course I had to step up and explain all of the dynamics of hearing and amplification. (glad that education is paying off!)

It was actually fun sitting in that jury room chatting with this hodge podge group.  We discussed the wolves in the UP where one man used to live, the showing of Clydesdale horses, eating at the Corner Bar in Rockford, and many other odds and ends!  Our break time ended, but we continued to sit and chat.  No one came to retrieve us!  We began to wonder if it were the sound system that was the hold up or if in fact we should start to have lunch.  Finally, after 20 minutes the judge came into the room.  He explained to us that the defendant had plead guilty so we were free to go!  The judge was very kind and took time to explain that this had happened maybe 20 out of the 200 cases he had tried in this court over the years where a defendant plead in the middle of the proceedings.  He took time to answer questions we had and explain what would happen to the defendant next.  It was all very fascinating.  For my first time on a jury I have to say it was a positive experience, but I am glad to get back to life around here again!
jury duty