Truck Driver - you made my day!!

September 06, 2013
Yesterday I left the house early with a list of a zillion things to do and accomplish.  I focused my tasks on the other side of town about 30 minutes away because there were a few things that I could only do there.  About 10 minutes into my drive out I realized I had forgotten my phone.  Oh the horror!!

I envisioned my house being in shambles when I arrived home - why exactly?  I don't know since no one was home and how would having my phone help? 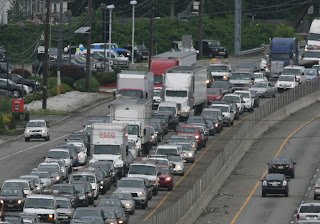 Anyways, as I headed home after 5 hours of being totally off the grid I got stuck in traffic.  There was construction ahead and we were down to a crawl.  I started to panic thinking that I may be late for the bus arrival.  I reached for my phone to call a neighbor and realized once again I didn't have it!  My heart started to beat faster and I began to get more angry at the stupid slow cars putzing in front of me.   Where was this construction that was bringing the world to a stop?   Finally, a sign appeared that said the left lane, which I happened to be in, was closed ahead.  I merged over to the right lane and fumed as cars sped past ignoring the need to merge.

Just when I thought I couldn't take it any longer, the big truck in front of me decided to take up two lanes.  As cars sped up behind him, I sped up as well and they were blocked from going anywhere.  Oh I felt terribly evil taking such delight in blocking off the fast track for those other cars!  I could almost hear the evil laughter in my head as cars and vans continued to try to gain distance and were shut down by my trucker friend in front of me!  I'm sure I had an evil grin ear to ear as each time another car's plan to move ahead of us in line was cut short.

Once we passed construction I gave the trucker a mental high five and a big smile and nod because by this time I considered us a dynamic duo!

And yes, this made my day!  It doesn't take much to amuse me I guess.  And yes, I did make it for the bus arrival in time!  Whew!!!