August 08, 2013
Right now Little Miss has three favorite things to do.  One is play outside with the kids, another is eat, and the last one is to go shopping! 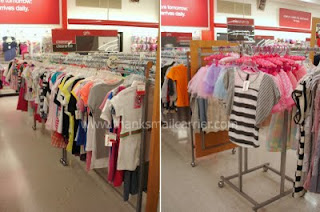 We went to Once Upon a Child today and picked out some clothes.  She is into skirts and dresses like no ones business!  She is very adamant about what she likes and doesn't like.  If I picked out something that she didn't like she promptly put it back on the rack.  She was not shy about picking out clothes she liked and adding them to the pile!  She is very girly in that she likes pink, purple, and frills!  We all had fun shopping with her and asking if she liked certain things or didn't like them.


The kids found it very entertaining to take whatever she said and turn it into a chant.  At one point the four of them were all chanting "I don't have strawberries." in Spanish.  Of course only Little Miss and myself knew what they were saying!  The other shoppers had some strange looks for our crew, but that was ok.  Everyone was happy!  I thought it was funny that none of the children asked me what they were saying for about a full five minutes of chanting!

I think she is very excited with how many clothes and shoes she has right now! (which is not a lot!) We just had lunch and she had changed her shoes three times and clothes twice.  I expect when she comes into the house again she will ask for another change!

She constantly wants shoes on her feet and I am guessing that this has to do with where she was raised.  Many houses have dirt floors so you would want to wear shoes continuously.  She even wanted to wear them to bed!

I also found it strange that she loves mayonnaise!  I made sandwiches for lunch today and the only thing she wanted to eat was mayo that she saw on the counter!  Of course, I put it on bread and made a sandwich for her with it, but after licking it off she wanted more.  She got the idea pretty quickly that she could eat the entire thing and not just lick off the mayo!  Again, the kids thought this was hilarious!

It is very interesting trying to learn the likes and dislikes of a toddler who does not speak your language.  I have no idea what she is allergic to, what she has tried before, and what she has already learned!  I am just so so so glad that she is potty trained!  We found that out really fast!
foster care refugee foster care