August 29, 2013
Last night I rode with my baby, who is a big kindergartener this year, on a trial run bus ride.  I sat next to him on the bus and watched him as he peered nonchalantly out the window.  He rode the bus to Developmental Kindergarten last year so this was old news for him.  As I watched him I had to hold back the tears.

Kindergarten marks the end of an era. The era of babyhood.  The era of wiping noses, wiping bottoms, carrying a child on a hip, luging the equivalent of a suitcase everywhere you go, and kissing boo boos. 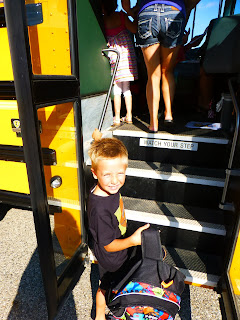 My baby is now an official attender of school.  He is on the road to picking out all of his own clothes, getting things off of high shelves on his own, making his own lunch, and worst of all refusing my hugs in front of friends!  Starting school means I  can no longer coddle and shelter my little one.  I am being phased out as the most important thing in his life!  The job I have had for the last 10 1/2 years has now drastically changed.  My role as sole provider of food, entertainment, and comfort is no longer the same.  My little shadow is now the leader when we walk down the street.

That's why I have to choke back the tears.  I'm excited for him and all that getting older means, but I'm sad to have to let go little by little.  Having his sweet little hand in mine, his head snuggled into my neck as we cuddle, having his little arms wrap around my neck as I carry him somewhere are all things I can't do in the school halls. (as frequently as I did when he wasn't in school)  I will not miss some of the aspects of babyhood, but it is sad moving on knowing there is no going back to that place of me being number one in his world so yes, these are selfish tears.  (no worries, I'm sure as soon as I am able to go to the grocery store all on my own and take a shower without someone busting through the door I will stop mourning the end of an era and look forward to this new one!) 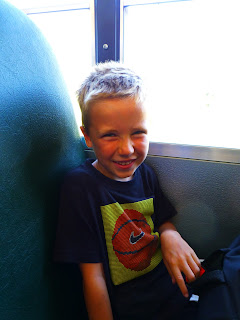 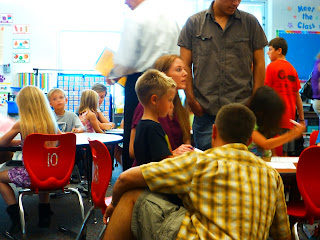 Back to school kindergarten