August 29, 2013
As I mentioned in my post about Pentwater, my family and I used to camp there in the summer when I was a teenager.  I invited my girlfriend to come up with me each summer and we were allowed to stay in a tent while my parents and sisters stayed in the motorhome.  I think I got the better end of the deal in this sleeping situation because what teenager doesn't want some freedom from her/his family?! 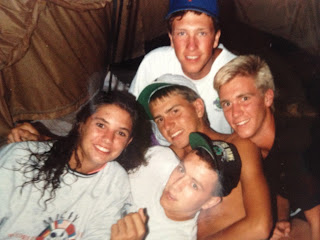 Camping in the summer was all about meeting boys.  I'm not saying we were boy crazy, but I think that is just what you naturally do as a teenager.  We met a ton of boys while camping and oddly enough I don't remember meeting even one girl!  We hung out with all of the boys each summer.  There was a group we hung out with and then there were a select few that actually turned into boyfriends for my girlfriends and I.

I'm sure Ryan is tired of my stories of camping and the boys.  I think each time we go back to Pentwater I have another story I remember to tell.  So many things I see trigger memories of the fun we had!  Unfortunately, for Ryan he just has to continue to listen to my silly stories! 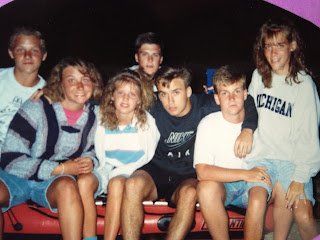 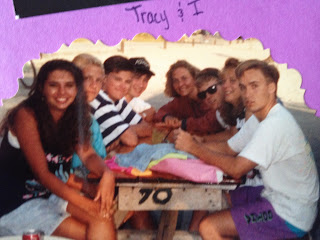 My stories have been fueled even more by my last trip to Pentwater because while on the playground with my children by the beach I saw a man playing with his kids who looked familiar to me.  It has been over 20 years since I have seen any of the boys I used to hang out with in Pentwater so I couldn't be sure he was one of them, but I knew if I didn't ask I would kick myself later!  So of course I went up to him and asked him if he was from around here.  When I realized what I sounded like I quickly told him he looked familiar and I used to vacation here and yada yada yada.  Long story short he was who I thought he was!  I even remembered his name and nickname!  Just so you don't think I am a total stalker my girlfriend remembered him too and knew just who I was talking about when I told her I ran into him!  I am still amazed I recognized him after all these years and remembered who he was.  To be completely honest, before we left for Pentwater I got out an old album and showed the kids some old pictures and he was in there so his image was fresh in my mind. 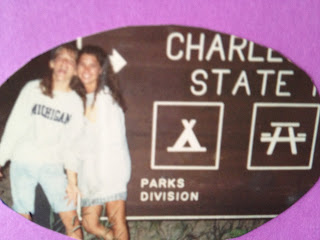 Ahh.. the days of youth gone by.  Sorry Ry, I will continue to come up with more and more stories to share with you and everyone else!  Beware! :)


Pentwater remembering the past teenager