July 03, 2013
Every summer we work at the kids not slipping into the "I'm bored so I'm going to pick on my sibling" routine.  They aren't used to so much free time and so little structure.  In my home summer always comes with a lot of behavioral issues.

So, this summer as in the past I have given the kids chores to do.  They are simple chores like walk the dog or set the table.  I have also given them the job of doing "stations" like they used to do in school.  They play the piano, do a math page, read, and write in a journal.  It is only an hour out of the entire day, but it seems to work well for them! 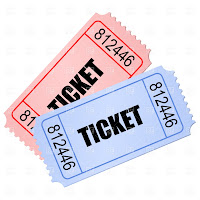 As in the past, they are given tickets each day.  They can earn four tickets a day and each ticket is worth .25.  At the end of the week they have a possibility of earning $5.  If they don't do their chores or make a bad choice (like they did today in the library with running around and being loud) they will lose a ticket.

Each Saturday I count up how many tickets each child has earned.  Sometimes there are extra jobs for the kids to do so they can earn extra tickets and sometimes they are disappointed when a sibling has a lot more tickets then they do because of choices they made! 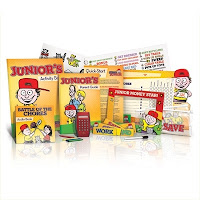 Because the kids are older, I am now trying to teach them the value of money and what it means to save, give, and spend.  Ryan, being the financial planner, searched out and found "Financial Peace Junior" which is a program for children by Dave Ramsey.  We have only been using it a month, but so far it is working out well.

We sit down every Saturday and divide up each child's money.  The kids each have three envelopes.  "Give", "Save", "Spend".  Ten percent of what they earn has to go into "Give" and another 10% has to go into "Save".  The rest of their money they can choose where to put it.  Sometimes they chose to put it in spend and sometimes they put more in the other envelopes.

During journal time I had the kids each sit down with me and tell me where their "Give" money should go and what they wanted to save their money for.  Tyce wanted a dragon, Lola wanted a blinged out camera (she started out wanting phone, but that isn't something she is old enough for yet), and Jackson didn't have any idea of what he wanted.  We found pictures online and I had them draw a picture.  We also calculated how long it would take them to save for what they wanted.

Each week we see how close they are to their goal.  It seems to be working out well.  Sometimes they have to be reminded on Saturday why they don't have that many tickets and that is a good lesson for them.  It keeps them in line and is teaching them the value of saving.  Hopefully they are learning something this summer besides how to push each other's and my buttons to the point of a break down!