Sleep-over in the Library

July 23, 2013
All elementary aged kids (at least the ones I know) believe that their teachers live at school.  It is hard to imagine them anywhere else and when a child sees a teacher outside of school it can be really confusing!  I think we put that belief out the window back in May!  How?  By spending the night in the school library!

Back in March our elementary had a silent auction.  One of the items being auctioned off was an overnight in the library with the school librarian. (Ryan and his adult buddies giggle at the mention of "librarian")  It was a mad race for who won the item and technically we didn't win it, but we offered to pay for the food that would have been provided and to match the winning bid if we could have a night as well.  I think Ryan and I wanted to do it more then the kids did!  I just kept thinking that I never got to stay overnight in my school and how cool that would have been and I don't know anyone who has! 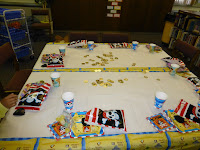 This was a fantastic experience!  The librarian, who is wonderful by the way, decorated the library to have a pirate/fairy theme since we had boys and girls in our group.  We allowed each child to bring one friend to the overnight so there were six children and three adults.  We all brought sleeping bags and pillows and found spots on the floor to crash.  (I do have to admit that we also brought blow up mattresses for us adults.  That school floor is hard!)

Throughout the night we ate pizza, had ice cream, made treasure maps and hid treasure, built boats and towers out of boxes, colored, watched a movie, and even had goodie bags!  I was expecting at least one child to ask for their parent, but we were so busy doing things that everyone did a great job and made it through the night!  I think the single thing the children liked the best was being able to run through the hallways!  I heard them say more then once that the principal wasn't there so they could run as much as they wanted to! (and they did!)


If your school needs an idea of how to raise money or do something special, this is a great thing to do!  The librarian organized everything, but the parents were there to help.  It was such a fun night and one that the kids (and adults) won't forget any time soon!