Another Day in Court

July 02, 2013
So when you are a foster parent  at times you have to venture to places you would not normally ever go to.

Yesterday I ventured downtown to the courthouse, another place I wouldn't normally have frequented.  When you have foster children there are different times for different reasons you are invited to court.  I was there for a 90 day review hearing for "J". 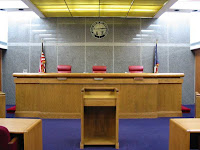 I was running a little behind so I put my purse on the conveyor belt and went through the metal detector without taking everything off like I do at the airport.  Unfortunately, I set off the alarm.  I checked my pockets and then took off my belt.  I stepped back through, was handed my belt, and I hurried toward the elevators with my belt in hand.

I slipped into the elevator with a rather handsome man.  He was in a full suit and carried a brief case. (I'm assuming he worked there)  As I struggled to put my belt back into my jeans I made small talk as he purposely tried not to look at me while I dressed myself!  He seemed relieved that his stop was a few floors sooner then mine.  As he hurried out I realized that at that moment I probably fell into the other class of people in the courthouse for him!  I can only imagine what he thought I was going to court for as I was dressing myself in the elevator!
foster care refugee foster care