Ahh.. Summer..We are finally home to share what we have been up to!

July 24, 2013
I realized this week that since summer has started this is the first time we have been home for an entire week!  As soon as the kids were out of school we went camping.  Granted, it was only 10 minutes away from our house, but it was the whole tent and great outdoors experience that we couldn't get at home!

We went to Hungry Horse Campground in Door, Michigan.  We went there last year as well and since we had such a fun experience, we decided to go again!  This time we invited some friends to go with us. 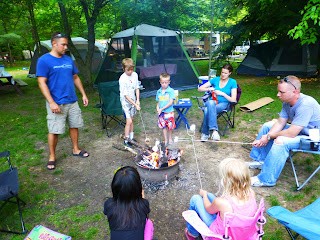 We had the same set up as we did last year- if it works then you should just go with it right?  The only thing we have now discovered is that it is a good idea to waterproof the outside of your tent even if it says it is waterproofed. Treat the seams for sure.  That is where it will leak if it leaks. We were rained on last summer and had some leaks that we sealed off with duct tape. (I bring that stuff with me everywhere!)  So before we packed up the tent we sealed it up.  Thankfully it didn't rain while we were camping on this trip so I'm not sure if it worked or not yet.

Like last year, we went on a wagon ride, made tie dye shirts, played on the playground, took walks, had ice cream caught frogs, and had s'mores!  It was just double the fun having friends with us!  So if you can get people to rough it with you, do it! 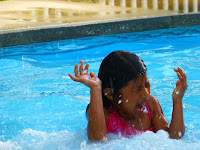 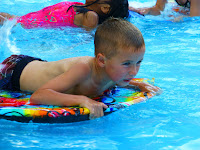 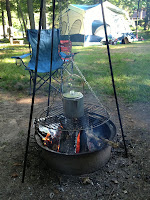 For Christmas Ryan got a few gifts that we used camping this year.  The kids and I got him a tripod to put over the fire.  We loved this!  We used it to cook our bacon, hot dogs, and other food.  I felt like I was truly camping cooking over a big fire!  Now I just have to figure out the best foods to cook over an open fire and I'm all set!  If any of you have recipes for me post them in the comments!

I think we only need to add one thing to our camping gear - well maybe two things.  I need a broom to sweep out the tent (which I already bought off of Amazon) and we need extra storage for camping items so we can transport everything in one car!  It has become too hard to take it all in the van with no carrier on top!  I'd like to venture a little bit away from the house to camp in the future, but I don't want to take two cars every time we do it!

One other side note:  From our friends we discovered that s'mores are that much better when you pair them with reese's peanut butter cups!  Wow!  I think we may try to peppermint pattys as well!
﻿﻿ 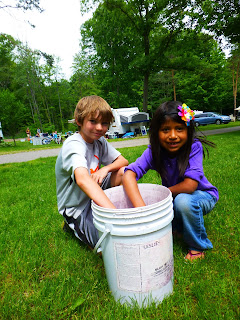 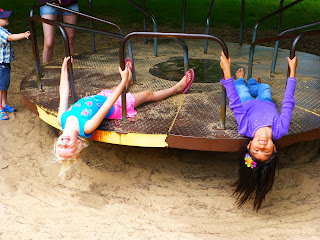