Getting Sent to the Principal's Office

November 13, 2012
I was asked to stay after a meeting the other day.  Just being asked this filled me with anxiety!  Was I in trouble? 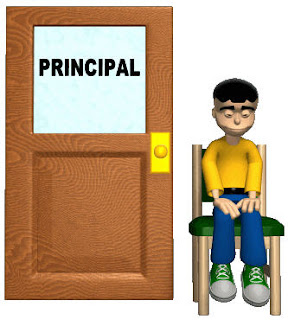 I remember in high school when I was called down to the office over the loud speaker.  I was petrified!  My brain went through a check list of each and everything I had done wrong to prepare myself for what I would face and how I would defend myself! (which I can't even recall now - I think the worst I did in school was make a couple teachers cry... that's an entirely different blog post... and TP houses with friends)

While I was teaching when I received notes or phone calls to go down to the office I did the same thing.  What kind of trouble was I in?

I once received a call from the founder and CEO of It Works! Global and immediately I thought I had done something wrong!

I don't know why my brain works this way.  Not once have I been called into an office, asked to stay after, or gotten a phone call from an figure in authority because of some kind of trouble I was in!  You would think that by now I would have lost that feeling!

BTW- The call to the office in high school was about being accepted to an exchange program in Spain.  The call that scared me while teaching ended up being an announcement that I had been nominated for "First-Year Teacher of the Year".  The call from the CEO of It Works!  was to announce that I had won a contest and had the most customers in a certain amount of time. Oh and the other day when I was asked to stay after a meeting I wasn't in trouble either...