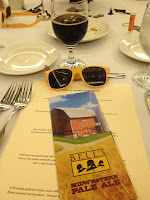 I know most of you have heard of wine tasting or going to a dinner and having each entree paired with a different wine, but have you heard of "beer tasting" or "beer dinners"? A few weeks ago Ryan and I went to such an event and were not disappointed.

First, you should know that I am not a beer drinker.  It is not my first choice in a beverage.  I was a little wary that the meal would be a flop for me because of this.  However, I was delightfully surprised!

Each entree was paired with a different beer from Bell's Brewery.  Some of our dishes were even made with the beer in it.  I wish I had saved the menu because the food prepared by the chef at Railside Golf Club was some of the best food I have had and I would have liked to tell you each course and which beer was paired with it!  The dessert was especially scrumptious and unique.  I would choose that dessert over and over again and that is saying a lot since I am a huge dessert consumer!

I do know that the beer tasted differently with the food that we ate.  I found myself liking the taste of the beer much more when I had the right combination of food on my pallet.  As a rule I especially don't care for very dark beers, but with dessert we had what I believe was called Black Note.  It was black as night and had a very unusual taste to it, but it was fantastic with the dessert!


Our host from Bell's Brewery was fun, energetic, and full of information about Bell's and beer in general.  My favorite part about him was that he brought gifts to give away.  In the past things were raffled off, but this year questions were asked and those with the fastest correct answer won an item.  I do much better in the raffles!  One year I won a t-shirt.  This year I brought home some chapstick and keychains, but I didn't win the coveted Bell's hoodie which now three of my neighbors own!

Of course I know we can not replicate this dinner, but we can try to have a "beer tasting" at home.  We tried it once before and tried to guess which beer was which, but we had way too many choices and after a few, they all tasted pretty much the same!  Practice makes  perfect though right??