Bear Cave should be re-named the Bat Cave!

November 12, 2012
All summer long we had plenty to do each and every weekend, so when we found ourselves with a partially free weekend we decided to fill it with a mini-adventure!  I had been looking through a book about things to do in Michigan and found something that I thought we would all find interesting. Or maybe I just found it interesting and dragged the rest of the family with me... 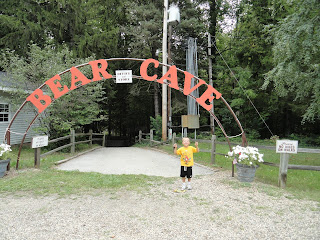 We headed south to Buchanan, Michigan.  I took note that on the way we crossed over a Wine Trail.  A few years back some of my girlfriends and I were driven by a brave husband down this way to visit some of the wineries.  Now that the colors are in full force, this would be a great time to visit again...  But I digress....

We headed to Buchanan where we found Bear Cave.  Bear Cave is the only cavern in the Great Lakes area.  Along the 40 foot winding stairway that leads visitors through the cave you will see stalactites, petrified leaves, and other peculiar shapes. The metal oxides of native ores color the entire cave.  The cave holds quite a bit of significant history. It played a significant part in the Underground Railroad during the period of slavery. In 1875 the “loot” from an Ohio bank robbery was “deposited” in the cave. This became the inspiration for the 1903 silent film The Great Train Robbery. The film is now considered a silent film classic and was the precursor of the thriller movies of today. The cave is entered through the gift shop. It is open from May to October and there is an admission fee.

As you go into the cave, the people at the front desk turn on a recording that tells visitors what they are looking at inside of the cave. There are also plaques on the wall that label formations.  At times it can be hard to hear what the recording is saying because there are only a few speakers and when bats begin to fly at you from all directions your shrieks tend to drown it out.  I may be exaggerating a little bit about the bats.  It is pretty dark in there so you don't always see them and they tend to stay high above your head when they fly, but I still let out noises that resembled shrieks when I saw them! 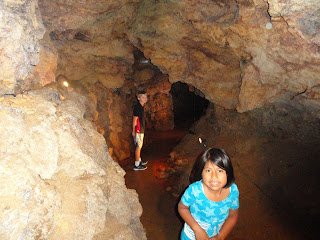 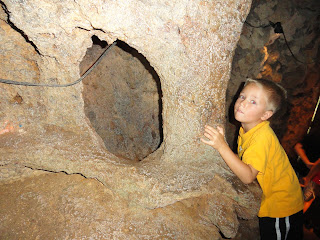 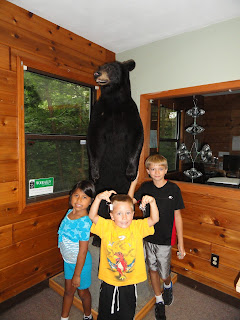 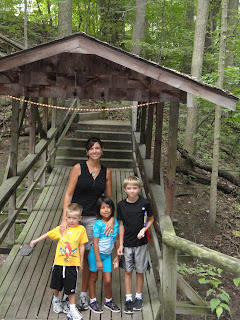 We spent a lot of time in the cave.  It was a pleasant temperature and I easily walked through the entire cave upright.  If it had been a tiny space I think I would have passed on the experience.  The rock formations are very interesting as are the colors you can see on the cave walls.  I think the kids liked it best when the bats swooped down near their mother.

The area surrounding the cave is rich in wooded hills, wildflowers, deep ravines, and of course, the magnificent St. Joseph River.  We walked around for awhile taking it all in.  This is also home to a camping resort that has a pool.  They also had a great clubhouse that we explored while using the restroom.

After our cave exploring, we took a 20 minute drive to Warren Dunes State Park (again passing over the Wine Trail)  The day was overcast and it sprinkled a few times, but that didn't stop us from climbing the huge dunes, running down, and playing at the beach!  We got everyone dusted off and in the car just in time for it to down pour! 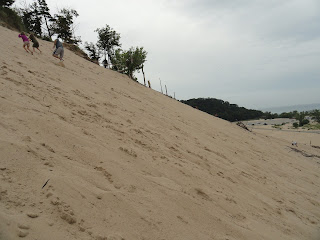 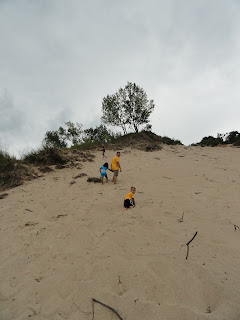 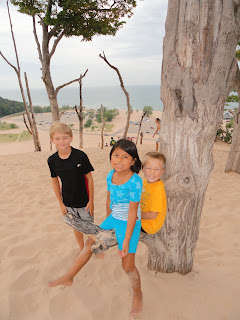 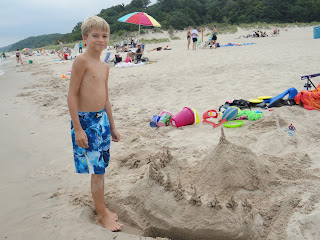 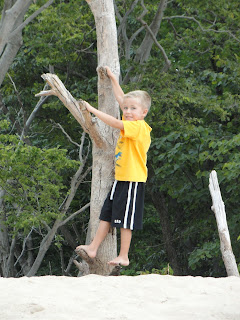 I often don't consider just getting in the car and driving somewhere new, but this was a ton of fun!!  I hope when we find another obligation free day on the weekend we can find another adventure to go on!  Maybe this time it will be with less bats!
bear cave Michigan travel warren dunes state park