October 09, 2012
Back in March I posted about a house that was on fire in our neighborhood.  You can get caught up  here.  It was an ugly house and it was in foreclosure so unfortunately, no one was sad to see it go.  I wanted to give you a little update about it.  Yes, I know that was forever ago, but it has taken forever before anything was done about it!  - about 4 months!!!

This is all gossip around this area so nothing I state here should be taken as hard facts!

Apparently on the morning of the fire the resident was seen in the garage with a gas can which he placed on the top of his car while there was smoke billowing out of the upstairs windows.  Another concerned neighbor stopped to see if all was ok and the resident said it was fine, he was just  going in the house to get some important papers and the fire department had been called.  The neighbor thought this was odd and called 911 anyways.  According to gossip, the fire had not been called in.  Due to these stories and other neighbors coming forward about things they witnessed that day there was an intense investigation that lasted a long time!  It is rumored that the fire was ruled as arson, but I don't know if this is true.  I do know that after sitting for months with a microwave hanging out in the open off a charred wall upstairs, the house was finally torn down!  The kids and I parked the car and watched it fall!  Neighbors clapped when the eye sore was no more! 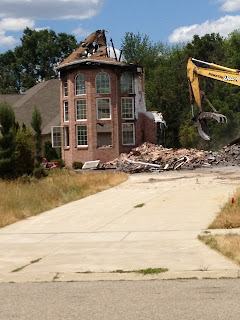 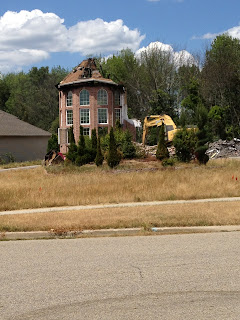 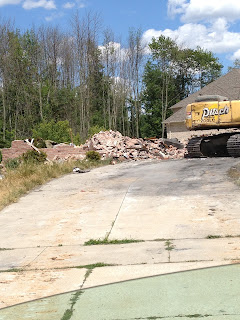