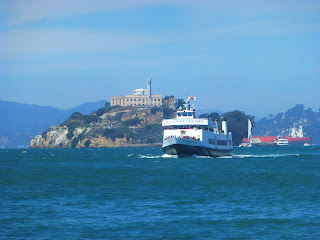 When you travel to certain destinations most of time there are "must see" attractions that you just can't miss.  In San Francisco one of those attractions is Alcatraz.  Just by looking at the lines and trying to buy tickets to this island you can tell it is a "must see"!  If you plan on going there, which you should if you are in the area, take my advice and buy tickets online way in advance!  While we were there tickets were sold out for the next two days!  In the summer they can be sold out for three weeks in advance!  Unfortunately, this may not be an attraction you can go to on a whim and it is definitely worth going so plan ahead!!

While in line you have your picture taken in front of a back drop of Alcatraz.  Of course it is super expensive to buy the two 5x7s when you return to the main land, but it may be the only good picture of you in front of the island!  (I have found many many people to not be that great of photographers which is why I am rarely in a picture or the pictures are taken by stretching out our arms!)

The ferry ride isn't that long, but they do have refreshments and bathrooms on board.  You can choose to ride inside or on the top.  If you want to ride out in the open, be warned that it is cold out there and you may get wet! 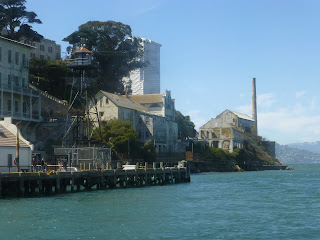 There is really no need to buy the map of the island unless you want to do some extra exploring.  You will be directed to the top of the hill to the main prison and given an audio set.  The audio set will take you through the prison.  This is an award-winning Alcatraz Cellhouse Audio Tour that is included in the price of your ferry ticket. The self-guided tour covers the inside of the cellhouse during the penitentiary era (1934 – 1963) and is narrated by actual correctional officers and inmates who were there at the time, giving both sides of the story.

This is an excellent tour!  It is very interesting, it keeps you moving around the area, and you don't get crowded by others because you can start and stop the audio if you want and spend as much time in one area as you would like to!  I can't stress how awesome this tour was!!  If you are on the island take the time to do this!  Where else will you hear from the actual people who experienced the events in a historical place?!

The tour and a trip through the gift shop took us all the time we had to spend on the island so it was perfect!  Ernest E. Lageson, the author of two books on Alcatraz (The Battle of Alcatraz – a Desperate Attempt to Escape the Rock and also Guarding the Rock – the Father and Sons Remembrance of Alcatraz) was seated at a table signing copies of his books purchased in the store.  He had grown up on the island while his father had worked as a guard.  His father was also one of the guards that was captured by the inmates during an attempted prison escape!  I can't imagine growing up in such an environment, but apparently they felt very safe and never locked their doors!  We bought the book and Ry is reading it now - so far so good!