October 12, 2012
A pet is part of your family.  Well, maybe not every pet feels as a part of your family as a dog or a cat would.  I doubt I would feel the same about a fish as I would about my dog.  At any rate, when you bring a pet into your home to love you often are faced with decisions you never thought you would face.  If the pet were a human there would be no question to what extent you stretch yourself, but being that they are an animal there is always a grey area.... 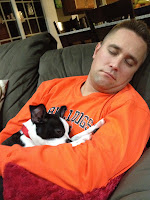 Back in December we adopted a little rescued Boston Terrier.  He was a cute little thing who has now grown to be a cute 20lb cute thing.  We (or rather I am) are still working on teaching him manners, but he really is a good dog.  Of course we all love him! (even Ryan who pledged he wouldn't like him at all is often caught playing with him or snuggling with him on the couch)

After we did the responsible thing and had him neutered he had to have a cone on his head.  He did not approve and it was the funniest sight when he tried to run and that thing swayed back and forth on his head until he ran into something with it!  Anyways, I think that stupid cone was the culprit of our months of vet visits and decisions of how far we would go. 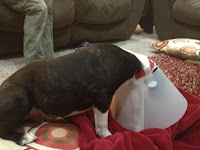 Tucker ended up having what is called a salivary mucocele.  It is basically a blocked saliva duct.  Since one or more ducts are blocked the saliva gathers in a different area.  The result was that our little puppy looked like he had a goiter under his chin!  He didn't seem to mind until it became so large that it looked painful and impeded his sleep positions, bone chewing, and eating! 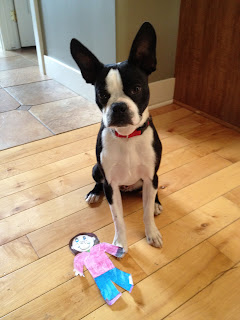 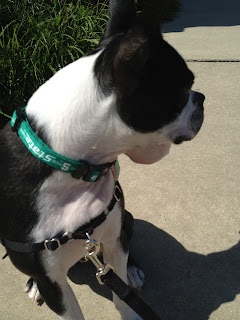 I brought him to the vet on many occasions to have it drained.  They simply put in a needle and sucked the liquid out.  Unfortunately, within six hours it would fill back up again!  We discussed surgery, but it was really really expensive and the outcome wasn't guaranteed.

The final straw came when one morning Tucker wouldn't get out of his cage.  He wouldn't eat, take treats, and just stood and shook.  I took him into the vet and found that he had an infection where we had been draining the saliva.  The vet had to put in a tube to drain it out.  It was miserable for him and for us to see him in such a state! 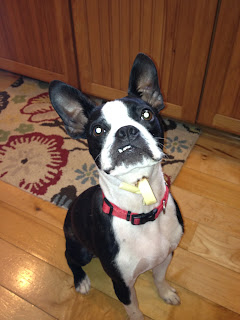 It was time for me to start researching the surgery and possible vets to perform it.  I was referred to one office who didn't want to give me any information over the phone.  They wanted me to pay $150 to come and sit in their office so they could tell me how much surgery would cost!  No Thank You!  The girl on the phone ended up grudgingly giving me a range of $4,000 to $6,000!!  (I later called back and told them they lost my business because of their less then helpful attitude on the phone)  You have got to be kidding me!  I called MSU as well.  They were much more helpful and forthcoming and gave me a price range of $2,000 to $2,500.

These prices for a surgery that wasn't guaranteed to fix the problem were frustrating.  We spent a lot of time talking about what to do and how much would we do for a dog.  In the end, there really was no question at all that we would do what we could to help our little guy!

﻿ We were very fortunate in that I was able to get a referral from the rescue group where Tucker came from.  They referred me to a vet that would do the surgery at a discount!  The only catch was that they were a two hour drive away one way!  The price and kindness of the staff and doctor, however, made it worth the travel!

I traveled there and back a total of three times.  It was worth it!  The surgery was in August, the doctor took out 4 of his 6 salivary glands and his chin has yet to go back to having the look of a goiter!  He does have a soft bump that could be fluid filled, but for right now it isn't growing and we are going to leave well enough alone.


I'm sure non-pet owners may roll their eyes at all of the time I spent on the phone, Internet, and road for the sake of a dog and the money spent.  It was all worth it though.  Think of it this way;  If I locked both my husband and Tucker in the trunk of a car, when I open it back up again three hours later to let them out, I can guarantee you that only one of them is going to be ecstatic to see me!