The writing on the wall!!

September 28, 2012
It was a nice Sunday afternoon.  The sun was out, it was a bit brisk outside, but the kids were playing in the basement and I was catching up on things around the house.  As I walked by the main floor bathroom I smelled something quite unpleasant.

This is not the first time that the bathroom has smelled like urine.  I have two young boys who often do not hit the mark or dribble around on the toilet or floor.  I noticed some dribbles on the toilet seat cover, but cleaned the entire toilet and left it at that. 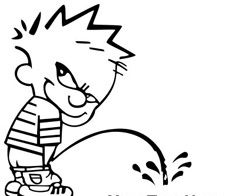 I should have known better.  The smell was just too strong.  Later on I passed the bathroom again and could still smell urine!  I went in and started sniffing around.  Literally, I got on my hands and knees and began to sniff!  I reached the trash can and BINGO!  As I looked inside I could see the contents were wet.  I picked up the trash and it began to drip urine!  Upon closer inspection I found the walls and floor to be decorated with streams of pee as well!

When I confronted the artist I was greeted with a huge grin, widening of the eyes, and meekly bowed head.  The stinker thought it would be fun to see where he could pee!

Only boys!!!  I guess I should be thankful he did this in private in our home bathroom!  This experiment could have taken a much worse turn!!