The "Lads" of Soccer

September 30, 2012
For a week this past summer we had the opportunity to host soccer coaches from the UK.  They were here to run a soccer camp through AYSO that Lola and Jackson were both attending.  We are used to having people not in our immediate family in our house so I thought why not?  One coach for one week won't be so bad!  Ryan may have thought differently, but I didn't give him the chance because I didn't tell him about it until after I had committed! ;)

They coached in the morning and then we tried to take them places in the afternoon so they would have a chance to experience summer in Michigan.  We went to Grand Haven Beach were we hung out on the beach and ate ice cream, Silver Lake Sand Dunes where we took a trip in a buggy over the dunes, Little Sable Point Lighthouse where we swam and they buried each other in the sand and ran down sand dunes, our local pool where they relaxed and swam, and up to my parents' home where they swam and did all things water related!  It was a busy week, but I have to say it was a blast! 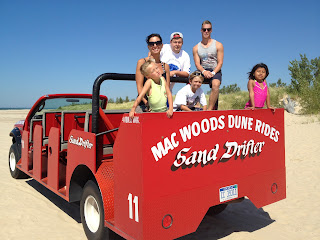 I think my past experiences gives me a good perspective on what an ideal house guest truly is.  These two were ideal house guests in every sense of the word!  You could tell they were used to being in other people's homes by the way they interacted with us, cleaned up after themselves, and asked about rules of the house.  They were courteous, polite, and acted like they really wanted to hang out with the family!  They seemed at ease with us which made us feel all that more comfortable with them!

﻿﻿We really enjoyed sitting down and finding out about their lives.  I also just loved listening to them talk.  Their accents are great, although it was sometimes difficult for me to understand them if there was a lot of background noise!  When the lads from Scotland were around I had to really really concentrate!!

﻿
I have to say that if you get a chance to host a coach through AYSO - do it!  I can't promise you they will be as awesome as the two we had in our home, but chances are they will be close!  They have their own transportation so you don't have to cart them around if you don't want to, they are adults so you don't have to be responsible for their behavior, and it is their job to work with kids and they like it so they are used to mass chaos and know how to handle it!