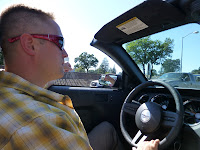 Our flights into San Francisco were very uneventful, but a little long. My only complaint would be with Dollar Rental Car. We waited over an hour in line to get our reserved vehicle! This put us on a bit of a time crunch because I had things to do and places to see! (even though we came to CA for a conference for Ry’s business, my fun was high priority!)

We packed our little black mustang convertible with our luggage and hit the road. Of course we rented a convertible!  With three children when do we get to experience such a luxury?!  We had a long drive, but it was a beautiful one. We went through wine country where there are hills upon hills of green vineyards separated by fields of yellow brown grass blowing in the breeze. The homes built on the hillsides added to the picturesque feel as we rode with the top down. The further north we drove the warmer it became and the more trees we saw. Soon we would see groups of pines only to be separated by rocky formations or vineyards.

As we approached Leggitt, CA we became surrounded by conifers. The road narrowed and became a tangled weave through the mountains. There were trees and nothing but rocky cliffs on either side. With the top down we inhaled the sweet smell of the trees. It was overpowering. The road winded around so quickly that this drive would not be for the faint of heart nor those prone to getting carsick!

Our first stop was Chandelier Tree in Leggitt. This tree is so wide that you can drive a car right through it! Of course that is exactly what we did! According to the woman who works in the gift shop, in the 10 years she has worked there, only three cars have actually gotten stuck! A lot more have scraped the sides or taken off their mirrors though! Other travelers around us tried to encourage Ry to gun it right through, but we had a lot of miles left to go! 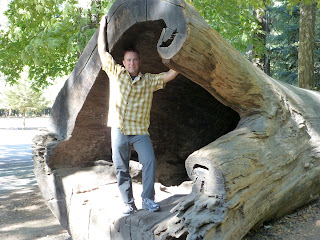 ﻿
After more curves and signs that warn of falling rock – which is a great thought when you are traveling in a convertible as is the thought of going over the side of the mountain even though Ry assured me we wouldn’t tumble far with all of the trees to stop us – we finally emerged out of the forest and caught a glimpse of the shore. This view is more than awe inspiring! 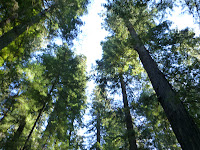 The black cliffs drop down into the ocean and you see jagged rocks sticking out in the middle of nowhere with huge waves bursting against them. The road hugged the shoreline so we traveled many miles smelling the salty ocean air mixed with the smell of the forest that was to our east. The little villages or towns that are set into the cliffs and hillsides in that area are amazing! We couldn’t help but speculate how long a drive it takes these residents to get anywhere! We also noticed they must really love where they are because there was not a single place up for sale! 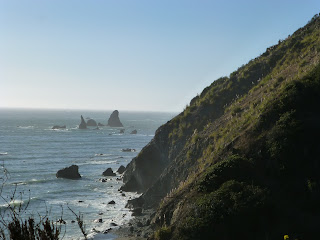 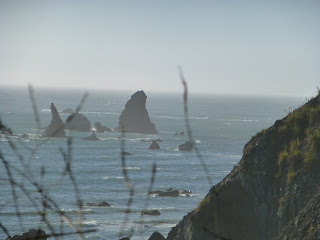 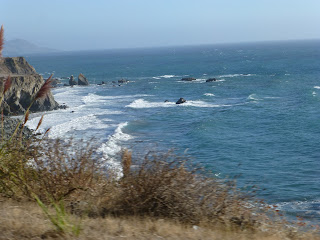 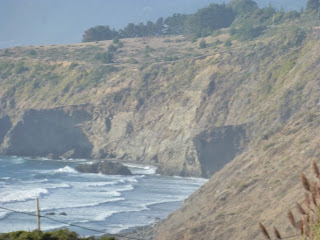 Our final destination for the day was Fort Bragg. We had five minutes to change and freshen up before meeting Ryan’s clients for dinner. (I am very proud that I was able to make myself look decent in that amount of time after being up at 5 am, sleeping on a plane, and riding with my hair blowing everywhere with the top down!)

We met down at the Wharf at a great restaurant. The river that flows to the wharf is called Noyo and it is where one of my favorite movies, Overboard, was filmed! They filmed scenes in the bar next door as well as right in front of where we were eating and watching the seals play. The bowling alley of Fort Bragg was also in the movie, although it is now a church, and the house that “Dean” lived in is still down the road.  Unfortunately, it has now been condemned.


We had a fantastic seafood dinner with great conversation and very nice people at Silvers at the Wharf. I had cioppino, which is had a little bit of a spice to it and was absolutely fantastic! (Thank you, Debbie for suggesting it!) I don’t usually rant about food that isn’t a dessert, but this is something I would have over and over again and then try to make it at home as well! Oh so yummy!!! 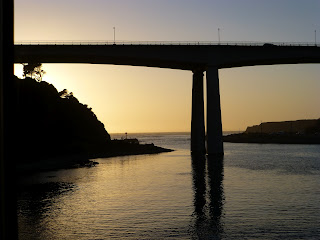 After being so stuffed we could barely move, we went back to our hotel which was The Beach House Inn on Pudding Creek. It is set up so that there are separate buildings and about 5 rooms in each building like a little apartment. The room was spacious, clean, and had the biggest tub I’ve ever seen! I’d definitely stay there again!


I am just amazed at how vastly different the scenery in California can be! In one day we went from hills and vineyards to mountains and giant red woods to cliff side ocean views! The temperature moved with the scenery! We went from 60 all the way up to 97 and back down again!  And yes the top did stay down, but the heat came on and the windows came up!
California Chandlier tree Fort Bragg Leggit San Francisco travel