September 25, 2012
It is never a surprise to me when my children come back with a "treasure" from the field or the woods.  It could be a rock, acorn, or even bones.  Most of the time the things they bring home in pockets or hands are not living and this never surprises me.

What they brought home Saturday, however, did surprise me and does not make me happy!

Ryan and the kids were out in the woods by a park looking for treasure.  They have been doing a lot of geocaching lately and were in pursuit.  Jackson was looking all over for the cache when he spotted a shoe box on the forest floor that was partially open.  Being the curious boy that he is, he kicked the lid as he leaned over the box.  Apparently he wasn't prepared for what was in the box because he jumped back like he had been bitten and yelled out!  Ry came to investigate as did the other children.

Inside of the shoe box was a guinea pig!  He was sniffing around in the box.  He had a little bit of food in the box with him and that was it.  Around the box was more of his pellets that led into a hole made by a woodland creature.  He was nice and pump so he hadn't been there that long, but he had a wound on his back that was scabbed over. 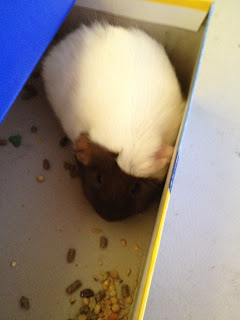 Someone had taken their pet guinea pig and left him in the woods to die!  Are you kidding me?  How can a person do that?  He is a domesticated pet for a reason!  He doesn't belong in the woods on a 50 degree day in Michigan!  How hard would it have been for them to take him to the Humane Society or Animal Control?  I am just livid thinking about it!!  I can't imagine what it would have been like had my children found him dead or almost dead in the box.  They know he is a pet and couldn't have gotten there on his own!

They brought him home and of course begged to keep him.  I have had gerbils when I was a kid and there is no way I am going back to cleaning those cages again!!  Plus, we have a dog who would love to "play" with a guinea pig, but the outcome wouldn't be pleasant and we have nothing to keep him in to save him from a new playmate!  I began by calling the Humane Society and Animal Control.  Of course it was a Saturday and after everyone had closed and there are no emergency numbers to call.  My next try was the pet store.  I thought maybe they would know what to do.

Thankfully, people who work in pet stores seem to really care about animals!  VI Pets will take in animals if they have room in their store.  Unfortunately for us, every store I called in West Michigan is full of small fury animals taking up space!  When I had reached my last VI Pets Store and they didn't have room, I didn't know what I would do!  So, I asked if anyone in the store would take him.  Right away one of the girls who worked at the store volunteered!

I drove him 20 minutes to the store where he was loved on by his new caretaker immediately!

The ending is a happy one, but they didn't have to abandon him!  It seriously took me 6 phone calls on a Saturday at 6pm to find a home for this little guy.  The people who had him before could have done it in 1 call on a weekday!  It makes me sick to think that people are so cruel!  Maybe they thought he would become one with nature.  It's true, he would have because he would have been eaten by something out there!  It took more effort for them to put him in the middle of the woods then it would have taken them to deliver him to some place safe!  I hope whoever did this is racked with guilt forever!  You are an awful awful person!!!
abandoned pets