August 07, 2012
Like always summer is just slipping away too fast!  I'm sure you have noticed there haven't been many posts lately.  This is what happens when I have next to no time to myself and the weather is gorgeous so I'd rather be outside!

Back in March we started some home improvements.  When you start projects things can get pretty exciting, but they can also turn in a not so exciting direction fast!

One of our improvements was to get a new roof.  Ours had been damaged by hail so insurance was willing to work with the roofing company to get it taken care of.  My advice to you when hiring roofers: do your research!  Find out all you can about the company and more importantly the crew!  The crew on our roof was without a foreman and they basically didn't know what they were doing or didn't care!  I'll spare you the boring details, but Ryan now knows a ton about roofs and it took about four months for us to get the roof that we could have gotten in a day from a different crew!  It was a nightmare, but fortunately, the company stood by and made it right in the end.

Having been through all of that I was very hesitant to hire people for my next project.  Since we have moved into this house four years ago I have wanted a new deck.  This is what our old one looked like: 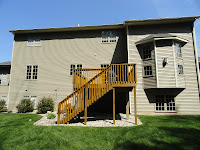 It's not a bad looking deck, but it was just too small!  I could fit the grill and a couple chairs on it and that was it!  So for the last four years I have had people come out and give me estimates and talk to me about a new deck.  This has been a big joke between Ryan and I.  I even ran into a guy a few months back that commented that he had been here to give an estimate!  It was time to pull the trigger!  I ended up using an entirely new company that I had not spoken with previously.

I ended up asking for recommendations on facebook.  I got an estimate and then I went out to meet the actual crew and watch them in action and to see their work.  The owner of Innovative Builders and Remodelers, Stuart Cavner, was very accommodating and answered all of my questions.  I had a ton!  I didn't want the same thing to happen to our deck that happened to our roof!

I don't know if men do this when hiring people, but I definitely hire based on my impression of a person as well as their work.  If a man (I've only ever dealt with men in regards to home improvements) talks down to me or acts like I don't need certain information because I probably don't know what he is talking about, I am immediately dismissing his company.  In addition, I don't need to be told what other companies do.  I am only interested in your company and getting the best for my money.

I have to say that I really think I did get the best for my money on the deck.  The crew was great!  They communicated with me on a daily basis and got my ok on everything before going forward.  We played with the stairs a bit and moved things around during construction and the crew was patient and happy to even lay out boards to show me how things would be. (or they acted happy, but either way it made me happy!)  They were on time, cleaned up everything, and even tolerated the children with smiles!  (It was huge entertainment to watch the deck go down and the new one go up!  The crew was even open to getting sprayed by squirt guns by the kids.)  Stu, the owner, stopped over many times during the week.  He checked in with me face to face at least twice.  I have never had as much attention from contractors before!  Needless to say, I would highly recommend this company for any type of building needs! 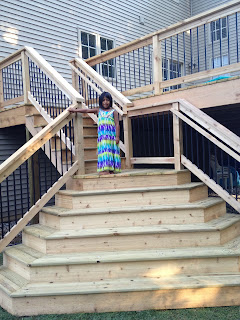 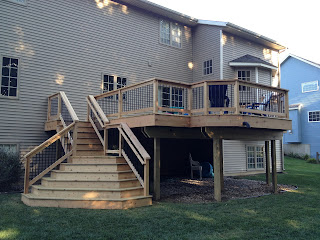