August 13, 2012
After a windy night where I dreamt cheerleaders were hitting the sides of our tent we headed out for Mackinac Island!

I had gone online and purchased a package for our family for the day on the island.  It included our ferry ride over and basically everything for the day besides food!  We had debated about renting bikes, (there are no cars on the island) but found that with rental for all of us and the ferry ride and entrance into the fort it would cost less to ride around in a horse drawn carriage for the day through the package!

We drove five minutes from the campground to Shepler's Ferry Line.  We went with this ferry just because they seemed to have more departure times to and from the island.  We found we didn't have to wait at all when we were ready to go either way which was nice at the end of the day when the kids and parents were tired out! 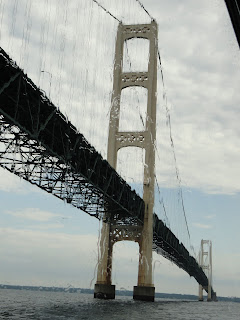 We we arrived on the island around 10 to an already busy Main Street on a Thursday.  There were bikes zipping down the street, people on horses, carriages, and a lot of people walking.  The kids were fascinated with all of the hustle and bustle.  Tyce immediately received a lecture about jumping in the puddles on the street as they were most likely puddles of horse pee!  It can be a bit smelly in the heat of summer, but they have workers who are scooping up the poo constantly so you don't encounter too much of a mess!

Immediately we had to find a bathroom because we had gone only 30 minutes earlier and had not seen every bathroom on the island yet!  Don't worry though, we saw them all!  There is a public one at Shepler's Ferry as well as one next to the Mackinac Island Carriage Tours in a blue building.  They were very clean. 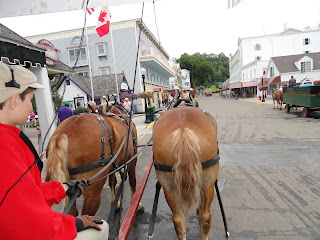 We turned in our voucher to the Carriage Tours and hopped on the next carriage right in front!  We had a nice tour of the island and learned many things I had never known even though I have been on the island quite a few times before kids.

Our first stop was Surrey Hills and the Mackinac Island Butterfly Conservatory.  We have a Butterfly Garden near our home, so I wasn't sure it would be that great of a thing to visit here, but I was wrong.  It was a smaller area so the butterflies had less area to hide in.  This meant that the butterflies were all around us!  They landed on us and the kids walked around with butterflies!  We spent a lot of time in the Conservatory!  The kids loved it! 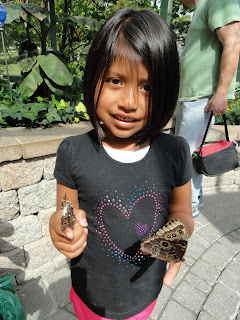 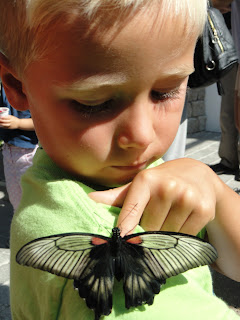 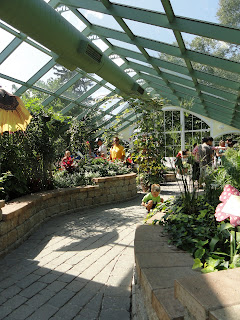 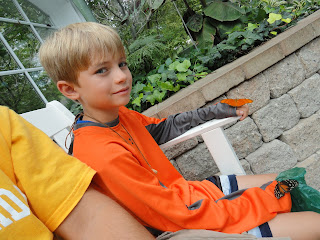 Back on the carriage we traveled through Mackinac Island State Park.  This is where you see cemeteries and many natural amazing land forms like Skull Cave and Arch Rock.  Our next stop was Fort Mackinac.  We explored the old fort and watched soldiers march and demonstrate shooting old guns.  At this point we could have gotten back on the carriage and ridden it to the Grand Hotel which I would have loved to go through, but the kids were hot and hungry so we walked down the hill to the main street to sit in air conditioning for lunch. (I solved my need to see the hotel by telling Ry he would just have to take me there some day since he has already stayed there before!  You actually need tickets or to be a guest there to even go on the porch.  We had tickets through our package, but it was hot and we didn't want to walk back up the hill - it is a bit of a trek to the Hotel from the main street) 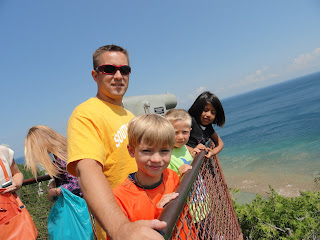 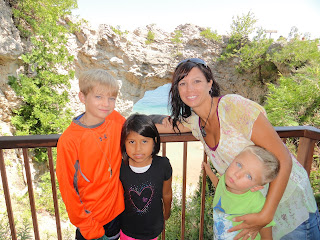 At lunch it was a little touch and go with the kids.  Tyce wanted to slide under the table which is a no no in public.  After telling him not to go under, he waited for me to direct my attention else where and slid down again, only to pull his place mat down with him thus dumping his bowl of applesauce on his head!  I couldn't help but laugh out loud!  We all had a good laugh about his applesauce head! 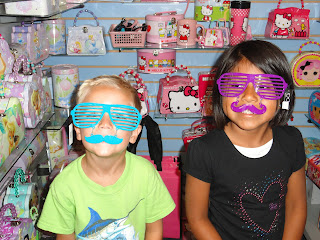 After lunch we hit the street on a mission for tourist trap trinkets!  I always get a Christmas Ornament to represent each trip we take.  The kids selected an odd assortment of things from the allotted amount of money we gave them to spend.  Tyce picked out a light up wand, Lola a ring, and Jackson a musket ball, bear claw on a necklace, and a glow in the dark spider.

During our shopping spree we bought some chocolaty snacks and sat in the shade on the street corner.  I was preparing to take a picture when something flew and landed on Jackson's back.  Ryan saw it right away and calmly told me to take a picture of what was on his back.  We had the kids sit very very still while I snapped a few photos of our hijacker.  When we finally told the kids that Jackson had a bat on his back they were very excited!  We thought with the excitement it would fly away, but it stayed causing us to wonder how we would get it off of Jackson!  Fortunately, it decided to fly away on it's own.  Unfortunately, at the same time a seagull came down and snatched it out of the sky for all to see!  The seagull took the bat on the roof and we told the kids that the gull dropped it on the roof so it was probably fine.  Not every day you have a bat land on you in daylight on the street! 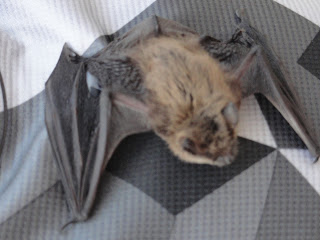 Before heading back to the mainland we stopped for ice cream!  Ry and I did some wine tasting when we got to Mackinaw City and the kids did some more shopping before we headed back to the campground for the night.