Is that Banjo Music???? Day One of Our Vacation

We decided to give it a try and head north in Michigan and camp!

Our first stop on our way to the campground in Mackinaw City was Big Bear Adventures in Indian Rivers. They have many different options to go down the river such as tubes, canoes, kayaks, and rafts.  We chose to get a raft and put the entire family in it.  We each got a paddle and a life jacket and were sent down the Sturgeon River (the fastest in Michigan's Lower Peninsula!) and emptied into Burt Lake  (the third largest lake in the state).  We were told the river was fast and there were branches and things hanging down so it could be dangerous, but we found many spots we could stop, swim, and hunt for rocks without incident. 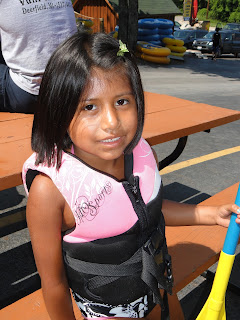 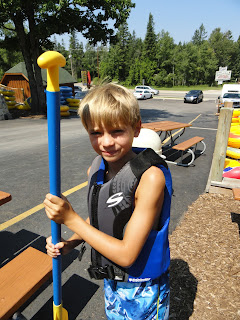 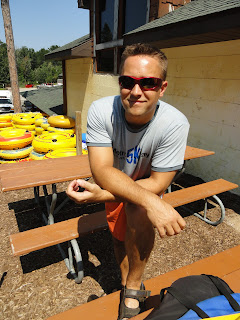 The kids loved it!!  They wanted to swim even though the water in the river was freezing!  They also enjoyed finding rocks in the river and of course throwing them!  We chose the 1 hour adventure which was plenty long enough for us!  We didn't encounter many people through the trip and there were some places I was reminded of the movie Deliverance, (because of the feeling of remoteness) which my husband and his friends tricked me into watching before a canoe trip on year.  I should have never ever watched that movie!!

At one point on the trip Tyce was finding rocks and of course he wanted to take boulders home!  When told to get in the raft because we were going to be on our way again, he stopped and looked at us.
"Wait.  I have to go potty." (this ended up being a theme song for our trip)
He ran a few feet back to where he had been standing.
"Wait.  I ... think... I went!"  Big smile on his little face.  It was one of those laughing moments for the family because he was so amazed!

If you go on an adventure such as this one I have a couple of suggestions.  Have everyone wear water shoes.  It just makes it easier if you want to get out of the raft and play around.  No one cuts their foot on anything and they have better footing on the rocks.  Also, even though they give you life jackets, bring some for the kids.  The life jackets were fine, but they smelled!  Ry and I had ours in the raft and thankfully our kids had their own.  I can only imagine the arguments we would have had had they had to wear the stinky jackets!!

We ended in Burt lake which was much warmer then the river.  The kids were able to swim there and play around a little without going numb.  If we had wanted to, there is a beach there were people were gathered and playing.  We chose to go to the car and do a quick change into dry clothes (like my Grandma Sophie taught us as kids) and grab some lunch before heading on our way!
family vacation Michigan travel travel in Michigan