Are We There Yet??

April 02, 2012
This past weekend we went on a huge adventure!  We traveled to visit one of my oldest and dearest friends 4 states away - with the kids by car!
This was our longest road trip by far!  We drove from South West Michigan to St. Louis Missouri!  I wasn't sure how the kids would do sitting for such a long time.  We do have a DVD in the car, but each child has a certain taste and they get bored watching after awhile so I had to be prepared with an arsenal of tricks and treats!

It took a little bit of preparation, but it was so worth it!  I think the kids enjoyed the road trip as much as they did when we reached our destination! 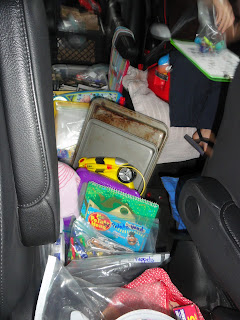 I put two containers in the middle of the van filled with activities to keep the kids busy.  We had books, coloring books, maze books, crosswords, sudoku, construction paper, blank paper, crayons, colored pencils, and some doodle boards.  I also packed in a couple of cookie sheets with letter magnets and other magnets we had.  I also had magnets that could be built into creations.  The kids loved making up words and stories with the different magnets on the cookie sheets and I was saved from retrieving things all of the time because they stuck to the cookie sheets! 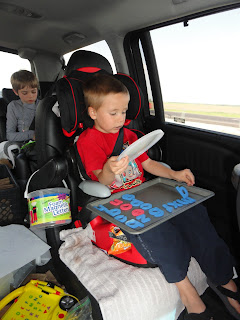 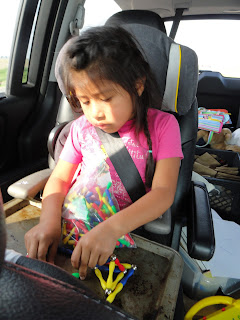 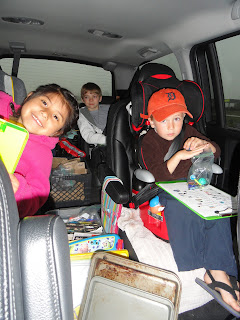 I also printed out a scavenger hunt that included pictures.  Each child had a clip board with the scavenger hunt on it and Jackson had an extra sheet with license plates and a map of the US.  This kept them busy for the entire trip down!  It was fun having them be so excited spotting things along the way to mark off on their sheets!  The little ones could participate because of the pictures.

Up front by me I had a list of game ideas to play and ways to pass the time when the natives became restless.
My list included: 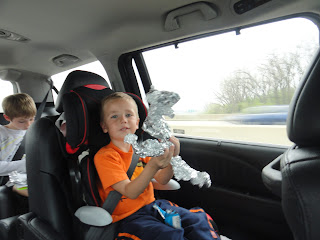 We didn't even do half of the list, but I wanted to be prepared!  Our most popular part of the car ride was getting tickets!  (not speeding tickets) I packed little brown lunch bags with a small toy from the dollar store or a special treat.  On the outside of the bags I wrote each child's name, if it was a toy or treat, and a number.  The number was how many tickets they needed to get the bag.  They went from the number 3 to 6.  For example a bag with a piece of gum was 3 tickets.  (My kids never get gum so this was a huge treat!)  Every half hour I gave each child a ticket.  This really helped pass the time as they weren't waiting to get to the destination as much as they were to get the next ticket!  I explained to them that they had to be doing a good job to get the ticket too!  They could choose to cash in their tickets or to save them and cash them in later.  I also used tickets if they wanted an extra snack so they weren't begging for food the entire ride down.  I gave everyone snacks, but if they wanted something extra like Gushers or chips they could turn in tickets for it.  A few times I chose to give them a sucker instead of a ticket at the half hour.  These tickets were the best thing ever!!!!  The kids loved it and it made the ride go faster and made it more exciting!! 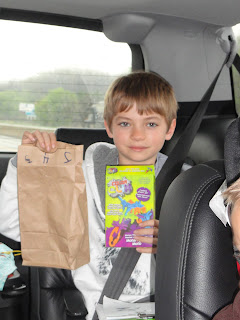 I was surprised about how well the trip to and from went.  Eight hours in the car is a long time, but the kids did great!  I was a little disappointed that I entertained the kids so well that the only ones that slept in the car were the two adults!  Oh well!  No major melt downs = total success and that was just the ride down and home!!  I'll tell you about the days we spent in Missouri tomorrow!!
activities for kids in the car car travel with children games to play on a road trip with kids road trip travel tips