Treasures after the Thaw...

March 14, 2012
The sun has come out of hibernation and the days are getting warmer!  Over the weekend we could play outside without hats and mittens on!  That is pretty impressive when I think about last year and the fact that we had snow in late April! 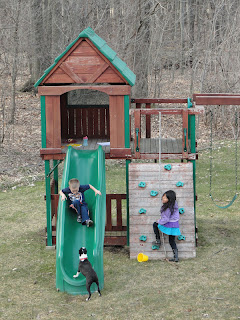 With warmer days every one begins to come out of their homes and take out things that were packed away for the winter.  (The fire on Friday brought a lot of people out too!  We have had more traffic through the neighborhood then ever before with people looking at the remnants of the fire.  The only question now is how long will it sit like that!)  We found lost toys from the summer before under bushes and tucked in the woods or bottles that have blown in the yard.  It seemed that everyone was finding treasures to share!  Some were of the creepy crawlie variety and some were treasures I wished had remained hidden!

This was also the first day that Tucker really got a taste of what it was like to be outside with the kids running around.  He was loving life!  He trotted after the kids and stole their balls or just explored.  It was also a true test of  how well he would listen to me when I called.  I have to say I was pretty proud!  It does occasionally take me shaking a can of pennies to get him to come running, but at least he does!

At one point he followed Jackson and A off into the woods on an expedition.  I was hoping the boys were paying attention to the dog and would bring him back with them.  Ry and I were busy messing with things in the yard and cleaning things up outside so we weren't paying that close of attention to him and thought that maybe later we would have to go search. (we are super responsible owners I know!)  Not long after they left, we were surprised to see Tucker prancing out of the woods back home to our yard on his own!  The boys were not even within hearing distance!  I was so excited that he came back on his own!  What a good dog!  I was singing his praises until I saw what brought him home.

Tucker had found a treasure too!  I have to say it was the BEST treasure of the day! (insert sarcasm)  I know what you are thinking and you are partially right!  A small mouse, dead bird, or some other little creature would have been a more appropriate treasure for him to find.  My 12 pound dog who is little enough to be carried by Tyce and sit on our laps couldn't possible come home with a tiny little creature.  No!  That would be too predictable, too mundane!  Nope, my little puppy came home with a deer leg in his mouth!  Yes!  A stinking, flesh covered, fur intact, hoof on, deer leg!!!  It was about as long as he is!! 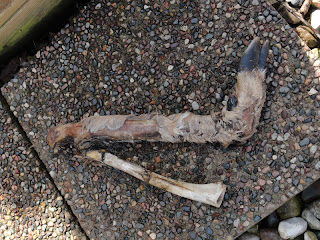 He proudly dropped it at my feet and prepared to enjoy his find!  What did I do?  Run inside for my camera of course!  I wished I had gotten a picture of him carrying it in his mouth because it looked so absurd, but I didn't want him picking it up again so I made Ryan pick it up and throw it away.  Of course Ry thought it was a cool find as well.  He turned it all around trying to figure out how it had come off the deer and what could have possibly killed it!

My next thought was to wonder what the boys may come back from their adventure dragging behind them!  Fortunately for me, they never saw the deer or any part of it.  They didn't think that was too cool and wanted to take Tucker back in the woods as their track dog to find more parts!  It's too bad it was time to go get some ice cream instead!  Bummer!!!  Sometimes those kinds of treasures are best left lost in the woods!  And it is amazing how easy kids can be distracted by ice cream! (they must take after their mother!)