February 22, 2012
What do you get when you fill a room with three energetic children, about 8 adults over 55, and whoopie cushions? 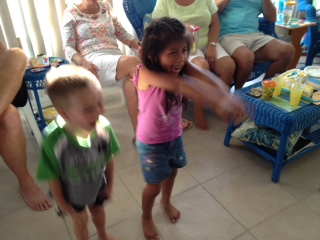 While we were in Florida, we celebrated Jackson's birthday.  Grandma and Grandpa invited friends over during their normal happy hour for cake and ice cream.  One of the friends gave each of the children a good old fashioned whoopie cushion. 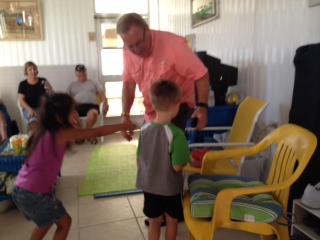 My children had never seen one before so after it was blown up and the first volunteer sat on it, well..... let's just say there was no going back!  I can't begin to describe the eyes that lit up, the huge smiles, the belly laughs, and the excitement that was displayed!  And that was by the 55+ crowd!

Tyce went from victim to victim and gave them orders.  "Stand up.  Close your eyes.  Sit down."  Being the good sports that they were, each person acted surprised and embarrassed and Tyce laughed just as hard the first time as he did the 43rd time!  This made everyone laugh even harder as we watched his reaction! 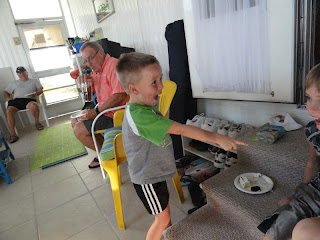 I guess the moral of the story is that no matter what our age we can all be easily entertained!
I like this last one because of how hard Jackson is laughing.  Tyce was expecting to sit on a whoopie cushion!