February 07, 2012
Last week Tucker was fixed.  This was part of the agreement that I signed when I adopted him from the rescue and I really have no desire to deal with a hormone souped up dog! 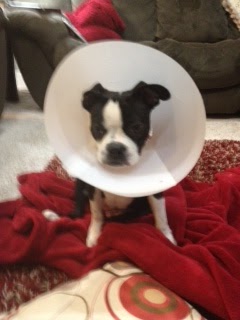 Unfortunately for my little guy, his testicles never descended so the surgery and the recovery were a little bit more in depth then the normal procedure is.  He has two massive cuts that extend down his belly.  Apparently they had to do a little searching to find what they were looking for!  As a result, he has staples over the incisions.  This also means that he must wear the cone.  The cone of shame.

I feel like the cone is the equivalent to the Scarlet Letter.  Everyone knows what the cone means.  He won't stop licking himself!  Of course this is natural thing for a dog, but for us humans it's not really embraced and encouraged!


When I put the cone on this is what Tucker did: 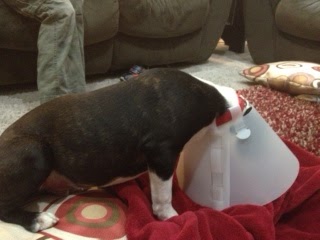 I didn't help by laughing as he tried to go through the house bumping into everything with the cone swaying back and forth on his head!
cone fixed neutered