The Pit of Despair is filled with socks....

February 29, 2012
Can small tiny little things really plunge you into a pit of despair?

I am living proof that yes they can. (or at least the little things can throw me in the pit)

It snuck up on me.  I wasn't expecting it at all.  It was an ordinary day that began in an ordinary way.  Tyce climbed on my head around 6am like usual and woke me up from one of my odd dreams.  This one happened to be about men in tuxedos who were really sharks - like the fish shark.  Once they walked down the steps and into the water they sported fins and gills.  One even tried to take a bite out of my calf!  Anyways....  He continued to talk non-stop about me making him snake cages and catching frogs while he snuggled my head until he declared that his pee had to "hatch"!  By the time I got in the shower Lola had also joined in on the non-stop chatter.  While her brother talked about the frogs that would hop all over the house in the summer she talked about what dress she wanted to wear to school and her friends.

I dressed, got myself presentable, made my bed, and went downstairs to make breakfast for the kids before the bus came.  While bending over to feed the dog, I noticed my socks.  They didn't look like my typical socks.  How had I not noticed them earlier.  Maybe it was the constant calling that was coming from below me begging me for food! 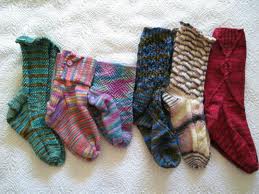 It was the pair of socks that ended up on my feet that morning that pushed me over the edge.  Why you ask?  The socks I had on were my 9 year old son, Jackson's socks!  Since when could I wear his socks?  My heels were even in the right spot!  Why would that send me into a pit of despair?  My baby is getting big which means I am getting old!  My son and I can wear the same socks!  How did that happen???

Ugh.  There is no denying it now.  My child is big enough to wear my socks and I have gotten old without realizing it!  Me - Pit........ boo!
what kids say