One Child's Treasure.... all kinds of ick!

February 24, 2012
Having children guarantees you will sometimes have to suppress your instincts and try to go with the flow.

Yesterday the boys asked to go explore the field behind our house.  I was happy to encourage this as the alternative was for them to continue to run around and rough house inside!  Having four boys and the dog all running and screaming around me wasn't all that appealing! (no - we haven't added more children = friends were over - I'm not completely insane - yet...)  So they geared up in hats and boots and marched outside.

A little while later in a rush of mud and squeals they stormed through the door!  Something was pushed up to my nose before I could focus on what was happening.  As I tried to focus on one piece of chaos at a time I realized that I was nose to nose with a skull! 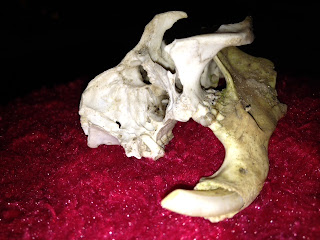 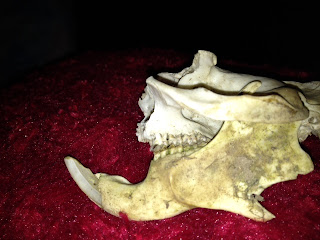 Yes, the boys found bones in the field, carried them home, and presented them to me.  Lovely!  This is a time to suppress that first instinct.  The skull was carefully placed in the garage with the other bones.  The boys were instructed to wash their hands and to be sure they had on gloves when they went out to the field again and they were instructed not to touch anything that looked close to alive. (the bones were picked clean thank goodness!)  Did I want them to continue to bring home bones?  Nope.  But I didn't want them to stay inside either!  It was a good learning experience right?

We later found that the skull belonged to a feral hog.  Apparently, these hogs are causing a lot of problems in Michigan and will continue to as they can reproduce like nobodies business!  We are talking 2 liters of about 5 swine a year and they start reproducing before they hit 9 months old! I'm surprised we haven't seen any evidence of them up until now! 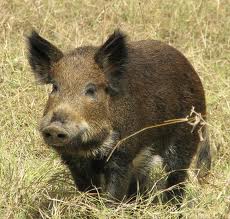 The skull is now packed in a bag sitting on my counter with the intent of it going to school.  Unfortunately, we have a snow day today so there it sits.  The gut instincts I have are officially being suppressed in favor of encouraging exploration and learning.  (for a few minutes longer anyways...)
feral hog