Danger in the Air 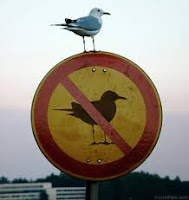 The kids love eating outside and having picnics.  When we are on vacation it is always a special treat to bring a bunch of snacks and sandwiches to the beach.  We have found out that this can be a dangerous event! 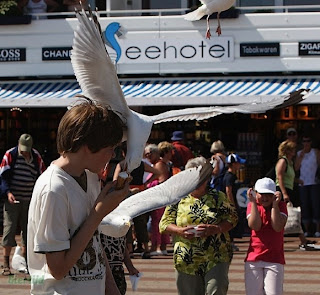 I know you wouldn't think it to look at them, but seagulls are dangerous wild animals!

While sitting on the beach munching on a sandwich, Jackson was caught off guard when a seagull swooped out of the cloudless sky and stole his food right from his fingers!  He had a bleeding wound from the beak of that flying rat to prove it!  My nephew has been attacked as well.  What wild animal so boldly approaches people to steal their food?  Even domesticated dogs will often hang back before going after food in a strangers hand!

When I was young I remember going to the beach and my sister ending up with seagull poo on her head!  These creatures are nasty and there are just way too many of them! 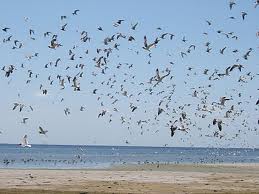 My mom calls seagulls flying rats and is all too happy to have a permit to take a rifle to them at their lake! It's too bad you can't do that to all of them at different beaches because I think she has the right idea!  It's a little exhausting protecting yourself and children from the rats in the sky while trying to enjoy a snack!  The only good I see from them is giving the kids an excuse to chase after them!