What Have I Become??

January 31, 2012
Sometimes I make fun of people.
Yes, I admit it.
It isn't the nicest thing to do and I don't do it to their face.  I sometimes feel guilty about it, but I still do it.

Last week I found myself acting like the people I have made fun of in the past.  I'm not sure if this means I am becoming one of them, getting old, or just caring less of what people think! 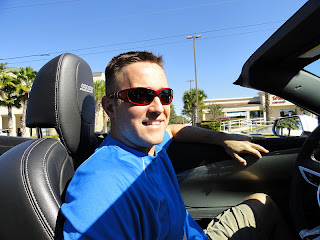 Last week we were in Florida.  We were lucky to get an upgrade on our rental during our trip.  Since we only needed the car for the two of us, Ry was able to get a convertible!  It was super fun cruising down the expressway in the sun!  We thought we were pretty spiffy in our flashy car cruising with the top down, hair flying, shades on, and big grins!

Unfortunately, as it got later in the day and we journeyed more toward the north the air grew cooler.  I put my sweatshirt on and watched as the goose bumps on my legs grew until I looked like I had some disease.

I tried to bring my seat up closer to the windshield because I had seen in a movie where the actress moved her seat up and the wind stopped messing her hair up.  It didn't work for me.  My legs are too long and I ended up looking like I was smashed forward with my knees my by ears.- not really lady like..

Finally Ryan put the windows up.  So we were riding down the expressway, top down, and windows up.  I had now become a person I had made fun of and would make fun of right now!  I looked at Ryan and told him we were old or just plain pathetic!  It did work though!  There was less wind and so I was warmer!  I then decided I might as well go the whole nine yards and turn the heat on!  That's right!  I was in a convertible for the first time in Florida with the top down, windows up, and heat on!!

At least I can laugh at what a dufus I am!  Why didn't we just stop and put the top up?  That's my fault.  For one I didn't want to kill the fantasy of the warm salty air flowing through my hair. (Not really like that because when I got out of the car, it was more like the air tied my hair in knots.  It does NOT flow through!)  It's not often I am in a vehicle that isn't a mini-van and dog-gone-it! I was going to enjoy it to the fullest whether my teeth were chattering or not!!  And two, I didn't want to stop and lose daylight hours!  There are only so many hours of sunlight and I wanted to get to the destination before it was completely dark!

So maybe it is now ok that I mock people who ride in a convertible teeth chattering, sweatshirt on, heat on, windows up, and top down!  I am one of them now!  I understand now and given the chance I just may do it again!
convertible Florida