Put the Lime in the Coconut

January 06, 2012
We like to try new things in our house.  Whether it is food or adventures, I like to keep the family on their toes.  You never know what Mommy may have in store.

Apparently some of that adventurous spirit is rubbing off on Ryan as well!  He gave the kids some coconut milk for Christmas.  They were super excited to open the cans and try it!  Unfortunately, it was a kind of cooking milk and not what Ry had in mind because it tasted gross!

We didn't let that stop us and we got a coconut from our local grocery store.  Ryan drilled a hole in it and then we all tried a sip!  Don't do that.  If you want to try the coconut milk or juice then you should drill the hole, pour out the juice and then slice the coconut open before tasting the juice! 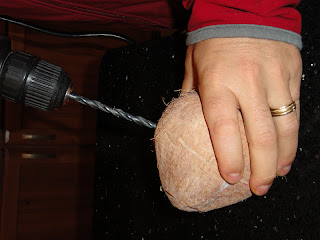 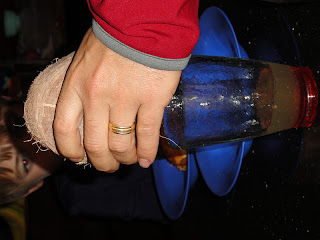 We tried the juice first and again it was not good!  Upon opening the coconut, we discovered that it was a bad coconut!  We won't give up though!  We'll keep trying to find some coconut juice that tastes how it is supposed to taste!  I'm on a small mission now!!!  Hopefully by the time we are done we won't have children who can never look at a coconut without feeling ill!
coconut milk