January 16, 2012
Over the weekend we celebrated my grandma's 89th birthday!

Oma is amazing!  She had a very rough year when we lost Opa and recently she lost her sister.  She keeps smiling and celebrating each day though! 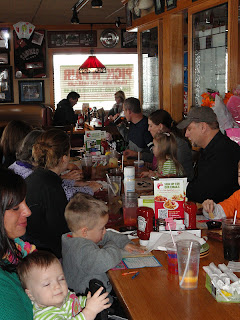 We had a low-key birthday lunch at Applebees.  The service was amazing, which was a surprise to me.  It is hard to service a table of 15 people especially when 6 of them are small children!

Everyone was happy and occupied during lunch, even if we had to make multiple trips with different children to the bathrooms.  The trouble came when people were done with their food and the natives began to get restless!  This was when the children began to turn into animals.

I don't mean that they were acting crazy like an animal.  I mean that they chose to pretend to actually be an animal and take on their characteristics.  I should be happy that my children and their cousins are so imaginative, but when all of them are kitty cats and are meowing, crawling under the table, and scratching legs for food and attention, it becomes a little much. (mostly the crawling under the table at a restaurant part)  That is the cue to vacate the premises as fast as you can manage because there is no regaining control at that point - even if it means leaving without shoes on!