December 25, 2011
I don't usually post on Sundays, but I thought I would wish everyone a very Merry Christmas!  I hope your day went as well if not better then ours has gone so far! :)

The kids were instructed not to wake anyone up until 7.  I heard them about 6 getting dressed and brushing their teeth.  Ry and I didn't get to bed until almost 1 because one 8 year old wouldn't go to sleep!  After the Christmas Eve celebrations with lots of family, all of the sugared desserts, having to make a last minute run to get milk for Santa, putting out milk and cookies, sprinkling reindeer food outside, and trying to put together a game with A, he could barely think straight, but couldn't sleep a wink!

At 7 on the dot they plowed into our room announcing it was time!  This is what I saw waiting for me: 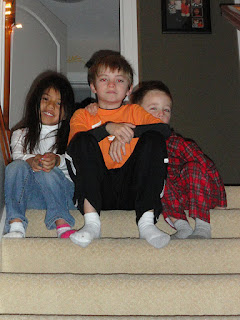 They did well waiting for Mom to quick throw something in the oven and get her camera before stampeding down the stairs to get A for his first American Family Christmas (which he told us was his best Christmas ever!  - He was very much in awe at all of the family gatherings and presents that were given to him.  He wasn't expecting them!  I have to say how proud I was of him for how polite and thankful he was to everyone even if he didn't know them that well!) 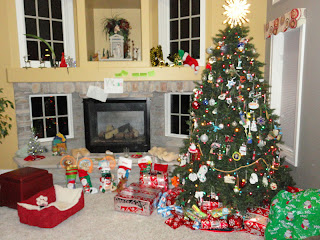 It was a made dash to the tree and the stockings.  Tyce was amazed that Santa knew exactly what he wanted!  Although, I think if there had been a rock in his stocking he would have been just as happy!  Jackson handed out the gifts and horded his so he would have the most to open at the end! (He so takes after his mother this way!)
Even the puppy, Tucker and the bird, Eagle were remembered by Santa!  Of course a puppy is just like a baby and only wanted to play with the paper!!﻿ 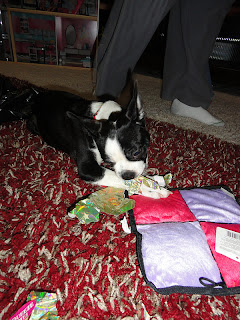 Here are a few shots of our morning!