I Found a Dead Body! 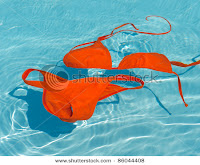 Twelve foot waves are really intimidating!  Even four foot waves can mean a face full of sand and a suit around your ankles! (thank goodness for frothy water and people being busy fighting the waves so they don't notice - at least I hope they didn't - maybe the fact that we were in a different country made it a little more acceptable)
While jumping over monster waves in Mexico recently and trying to avoid humiliation when they got the better of me, I couldn't help but remember a time I was jumping waves in Lake Michigan when I was 13 years old.
My family vacationed in South Haven every year.  We camped in the state camp ground.  I have many fond memories from those summers!  The families that my Dad worked with at the Nuclear Power Plant would all get together and camp at the same time.  We rode bikes, had camp fires, swam, raced remote control cars, picked raspberries in the woods, and caused one form of mischief after another!  It was actually during one of these summer camping trips that I developed my very first crush.  Wow did I think he was dreamy!  He was older then I was and I thought he walked on water!  His little brother, Matt and I were really good friends and did everything together, but I always had my eye on the older brother seeking out his attention.
Smothering humid heat plagued us one summer.  It was all we could do to keep cool.  Stepping out of an air conditioned trailer felt like you were stepping into hot water and made it difficult to take deep breaths.  The air was that thick.  On one particular day it was announced over the loud speakers that a boy was missing and there were strong waves on the beach that day.  But because of the heat, we had only one choice and that was to go to the beach! 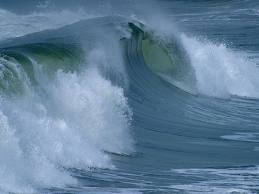 The waves were huge and we were delighted!  My best buddy, Matt, and his little sister accompanied my mom, sisters, and I to the beach. As we battled the big swells, the little girls were begging to take off their life jackets.  Matt and I didn't want to be responsible for the little ones so we wouldn't let them; even though our moms weren't far away.
After a time, I was on my own.  As I jumped the waves enjoying the the pull of and tug of the current, I felt something touch my leg.  It felt like someone was trying to grab my leg.  My first thought was that Matt had snuck back to try to scare me.  I ignored him and kept on jumping. I felt the touch a second time and looked around laughing.  "Nice try!" was my response.  However, I was talking to air as there was no one around me.  Maybe he had swam back to shore and I couldn't see him in the waves.

I felt the touch again and became confused and a little concerned.  As I looked around I finally spotted what I kept brushing up against.  Over a wave came crashing down a bloated body!

I screamed and ran toward the shore as fast as I could battle my way through the unforgiving waves!  I screamed for my mom that there was a dead body in the water.  When I made it to shore I swear every mom on the beach had her eyes on me except for my own mother!  She was calmly reading her novel much to my distress.  To be fair it was very windy and wavy so the beach was loud and my voice was most likely carrying in a different direction and what seemed to me like a lifetime was probably two seconds at the time!

As soon as she saw the look on my face she jumped up and rushed over.  I was in a panic and continued to scream that there was a dead body in the water.  She wanted me to show her where it was.  There was no way I was going back in that water!  We looked out over Lake Michigan and I saw it again roll over the wave.  I pointed but would not go back in the water.  My mom bravely forged the crashing waves.  I could see her cringing and I'm sure she wasn't too happy about going into the water to find a dead body!

A small crowd had gathered, but I barely noticed them as I focused on my mom and wondered if she would have to drag the body on shore.  She finally reached it and was able to take a closer look.

"Come here!" she yelled.  Was she crazy?  I wasn't going anywhere near that thing!  She yelled back that it wasn't a dead person's body, but the body of a huge bloated fish!  I had seen the riped tail that had looked like fingers with the flesh flaking off under the water.  (maybe a few too many horror movies or books for me??)  I could see the relief flood my mother's face.  I, however, was flooded with embarrassment!  Matt told every person we met about my adventure including the DNR!  I was mortified for a little while and then I was able to laugh at how truly funny the situation was!  I was and am very thankful I didn't actually find a dead person's body.  My imagination got the best of me and continues to from time to time!
dead body Lake Michigan South Haven waves