The Greatest Invention EVER for a puppy!!

December 15, 2011
Preparing your house and life for a puppy takes a little planning!   I had ideas in my head, but our little one came into the house way before I was expecting him so I wasn't able to plan it all.  To get ready for his arrival I did get a crate or cage so he can sleep in it and stay in it while we are away. I also got a little play pen type fence that I have set up in the kitchen. Being that he isn't house trained yet, I wanted to be able to put him somewhere when I couldn't keep a close eye on him! 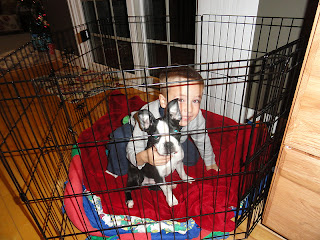 Tyce calls the "play pen" Tucker's cradle and often is laying inside of it with the dog!  I walked by the other day and both Lola and Tyce were in the cradle with a blanket and Tucker snuggled between them! 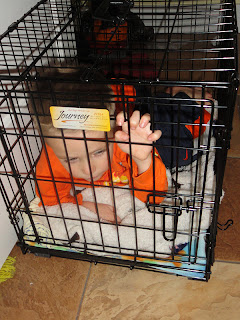 They are both also big fans of his crate.  They don't want to put the dog in it; they want to play in it!  They will get in it one at a time and ask to be locked in.  Thankfully there is really no danger to them playing it the cage!  Sometimes I think they are enjoying the things that come with the dog rather then the dog himself!

My biggest project in preparing for the puppy required a trip to Home Depot. (and is the most awesome invention for a dog EVER!)  They sell these online and in pet stores, but I decided to make it myself.  I showed an associate a picture of what I wanted and told him the measurements and he went at it! He cut the boards, got everything I needed to make it work, and showed me how to put it all together! I took it home, painted it and then had Ry help piece it all together! We made a "porch potty"! 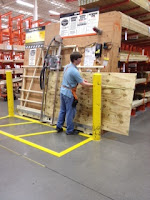 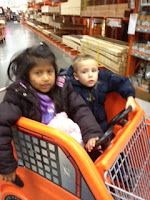 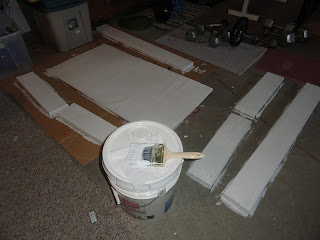 It is lined with a tarp and has rocks and some indoor carpet on the top.   The plan is to put sod on it, but there isn't any available around here at this time of year.  We have it on our deck because the snow is coming soon and Tucker is not a big fan of the cold weather!(and I do not want to go outside each time he has to go and watch him!)  This way we can put him right in the box, tell him to go potty, and bring him in again! Amazingly enough he uses the box consistently when he is on the deck!  Now we just have to get him to let us know that he needs to go! (I am trying to train him to ring bells for that...)  I really do love our "porch potty"!  I can see that he went and clean it up so we don't have to worry that kids (or I) will track it around!  Ry and I talked about putting a tarp on the top to help keep the snow off, but we will see if we get around to that...

Now I will just have to cross my fingers that my preparations will pay off and he will be house trained soon!! 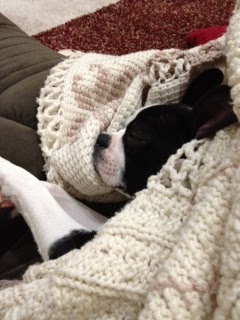 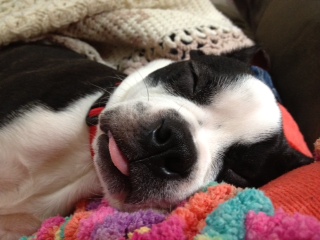