Exposure to the Arts

December 13, 2011
When Jackson was an only child I used to take him to a ton of events.  Now that I have four in tow, it is a bit more difficult of a task to accomplish.  Last night I would like to say that I decided to expose the children to a bit more culture, but in reality I was forced into it!

Ry had people come in from out of town and went to a "business" dinner.  A had a concert at school - he is in the choir.  His concert would not be done until 9pm so since I knew I would have to pick him up (those business men apparently eat extremely slow) I thought it would be best to keep the kids awake and not have to get them up to go pick up A.  So, we went to the concert.

The kids were thrilled that there were cookies and punch in the entryway.  I wasn't that thrilled about the possibility of three kids on a sugar rush while having to sit still for two hours.  When we went into the auditorium we had to decide if we were to sit in the front where the kids could see everything and everyone could see them or if we would sit in the back where no one could see anything!  The kids chose to sit in the very front - like four rows from the front (those four rows were empty)!  My thought was that the closer we were perhaps the more engaged the kids would be in what was happening. 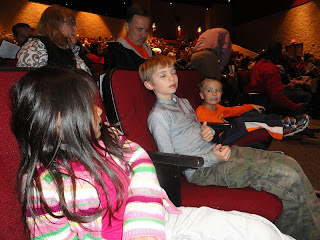 The concert was really well done.  It wasn't just Christmas music and contained a little bit of everything.  They had monologues, singers, jazz band, string quartets, and even barber shop singers!  It moved fast from performance to performance and the performers were positioned in different places so it kept things moving.  The children did fantastic for the first hour.  That was long enough!  That only got us to intermission. (there weren't any cookies or treats during intermission - this was met with big groans)


I would say that all in all our exposure to the arts went very well.  It was well past every one's bedtime, but there were no break downs and the worst part of sitting in the auditorium was that someone behind us had terrible gas!  I asked the kids who had to go poopy loud enough for the row behind to hear so they would get the hint!
Christmas concert