October 18, 2011
I rarely go to the mall and I am only about ten minutes away!  I thought that being so close I would be there often, but when you factor in that I have to take children with me, it kind of takes away the pleasure of it all and becomes more of chore then anything else!

First, there really is no shopping when all of the kids go with you.  You better know what you want and where it is so you can get in and out fast or you spend an extra 30 minutes in each store corralling bored children out of clothes racks!

Second, there are too many temptations like sugary foods at the mall.  I do not want to have to buy a pretzel each and every single time we go there! 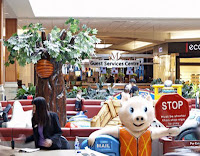 Finally, the play area just plain creeps me out!  There are so many kids with runny noses slobbering all over the place!  Big kids plow over my smaller ones and parents are sometimes non-existent when their kid hauls off and smacks someone.  Don't even get me started on trying to get the kids to leave the germ pit!  I lie each and every time and say it is closing down!

Now, let me tell you about my shopping experience at a mall just last week.  I had only one child with me so I thought, "Fabulous!  So much easier to shop and way more fun then having to watch all of them and keep track!  I'll actually have one hand to hold and one hand for purchases!  Woohoo!"

Things were going very well.  I made sure to explain before going into each store that we were not going to buy anything in the store, but were just going to look around.  If there was something that the child really really wanted then I could take a picture of it with my phone and send it to Santa! (yes, I am a genius)  Unfortunately, the euphoria of my successful trip to the mall was shattered when we had to leave.

I can't even remember exactly what happened that triggered the chain of events, but it doesn't even matter!  My child began to scream at the top of their lungs. (you would have thought I was breaking their knees with a hammer!)  Next, it was time to run from Mommy.  Mommy doesn't play that game!  I walked the other way, being careful not to be caught watching where my child was!  Soon I had a banshee possessed child racing toward me!  It clung to my leg and shrieked!

I did stop and explain that when their voice sounded as calm as mine I would love to talk to them about what was going on, but that only got responses of, "I hate you!  You have no brain!"  So, I continued to walk dragging a screaming child clinging to my leg and once in awhile flashed a smile at the people watching the show.  (not feeling like a genius at this point)

We get out to the car and get in it with a bit of a struggle.  Child begins to kick everything in sight!  I rest my head on my steering wheel.  I feel defeated and deflated.  Now what?  I try a hug, I try calmly talking, and yes, I even yell - we all have our breaking points and mine was when a shoe smacked me in the head!  Oh.. I wanted to drop kick that child right out of the car, but I didn't.  Instead, I called Ryan and told him to tell me I wasn't an awful parent for thinking such thoughts!

The drive home I repeated the mantra that if their voice sounded as calm as mine I would be happy to talk about things.  Unfortunately, their mantra was, "I want to go back to the mall!" in very shrill tones.  Things continued to fly at my head and I was surprised to see my child not completely naked by the time we got home!  I guess I need to clean out my car!  I would have pulled over and waited it out, but I had a child to pick up at school so no such luck!

And that ladies and gentlemen is one example of why going to the mall with any child at all is my last resort!!

If you read my blog once in awhile, why not make it more of a habit and follow me!  Sometimes I post things over the weekend that I don't share on facebook!  You don't want to miss out! :)  Go to the right and pick the method you want to use to follow! It's easy!

By the way, this child doesn't always act like this!  I think it was a combination of a cold, anxiety from school, and being tired.
mall tantrums