October 06, 2011
Pure relief!  That's it just plain and simple!  I feel as if a huge weight has been taken off of my shoulders and it made my day - no, maybe my week - maybe even my month!  That is how happy I am!


I have been wanting to write a post about my run-ins with this individual since our first encounter, but thought it wise to wait.  Now that I hopefully will never have to work with him again I can fill you all in on this man I will refer to as "Clueless Clyde". 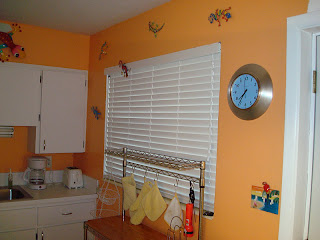 Ry and I have a tiny little home in Florida.  I wasn't too keen on getting that little house, but now that tiny little house is MINE!  I took my 10 month old down to Florida on my own and riped that place apart!  Paint, tile, carpet, plumbing, yard work, hardware... there wasn't a thing that didn't need some help in that tiny little house and I did most of it!  I put my blood, sweat, and tears in that little gem and you will have to pry my dead fingers off of that deed to get it away from me! (I guess I feel a bit of an attachment to that house..)


Anyways, I fixed the house up and furnished it (super cute and tropical - very bold - I'd never dare do the same to our MI house) so that our family could go down and stay and we could rent it out occasionally as well.  It worked out really well and we had so much fun down there!  Loved it!  Unfortunately, the bottom fell out in the economy and we had to make a few changes.  One of those changes was to sell everything in our tiny little Florida house and rent it out full time.

I wasn't happy about that idea, but the alternative was unthinkable since Ry didn't want to raise a son alone. (because remember someone would have to kill me before I would sell the house)  So I did what had to be done and emptied the house out and sold everything!  I also hired a property management company to take care of the house and the rental things and all of that.


For two years we coasted along.  The renter was great and our property manager was awesome!  Things were near perfect.  That was until we were told that the company would be giving us a new property manager.  I was optimistic and assumed that all would be fine.  Cue the music that brings on a feeling of doom here.

In comes "Clueless Clyde".  I have no idea how old Clyde is, his nationality, his ethnicity, or anything about him, but I do know he is an ignoramus and although our first conversations were fine, the longer we communicated the more uncomfortable I became.

Our original renter moved out and Clyde then had to post how much rent we should list on the house.  He didn't have any suggestions as to how much we should ask.  I had to do the research online and tell him what houses in the area were being rented out for.  Hmmmm... maybe that wasn't in his job description.  What do I know? 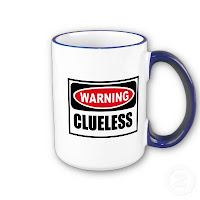 One day he called me and said he brought some prospective renters through the house.  They loved it and were ready to go, but we needed a new stove and refrigerator.  So he wanted me to authorize spending money on each appliance.
Really?  That is odd because the other renter didn't say they weren't working.  Are they broken?
Clyde didn't know.  He didn't check.  Oh wait, I guess the refrigerator works because he remembers opening the door and there was food in there.  It was just dirty.
So.... you want me to buy a new refrigerator because it is dirty?
Oh - guess not.  I'm sure the refrigerator is fine.  We'll just clean it out when the renter moves out.  But the stove needs to be replaced.
Really?  Did you turn it on?  What's wrong with it?
Clyde didn't know.  He never turned it on.
I patiently told him he needed to go back to the house and see if it worked.
He did it and said that it worked fine, but there was rust on the side of the oven so it should be replaced.
Really?  You want me to spend $300 on a new oven because mine has rust on the side?  Does the rust interfere with how it works?
Oh.. no - it is on the side of the oven.  It isn't near the stove or anything.
Idiot, put some paint or something on it to cover it up!  - No I didn't say that, but I felt like jumping out of the phone and ringing his neck!  What a waste of my time! Use some common sense!  Are you five years old?

We didn't end up replacing any of the appliances and we got in some nice renters.  I breathed a sigh of relief that all should be fine and I would not have to deal with Clyde again!

Cue music again.  I get a bill in the mail in my name for water, sewer, and garbage in Florida.  What???  I call Clyde.
Clyde doesn't know.  Guess you'll have to call the city and find out what is going on.
I honestly thought that was why I hired him to do that kind of thing, but I did it anyways.  To make a long story short, Clyde never told the tenant that they had to contact the city to get the utilities put in their name to be turned on.  They had the know how and turned the water on themselves.  When the city finally saw that someone had turned on the water without permission the water was turned off permanently and the tenant was then forced to go to the city to set up their account.  We were sent the bill for them tampering with the valve and their water usage before it was turned off.

I called Clyde and explained it all to him.
Guess you'll have to pay that then.
Cue fire coming out of my ears.  No more patience.  I spent nearly 45 minutes on the phone trying to sort things out with three children tugging on me and screaming the entire time.  I was in no mood! 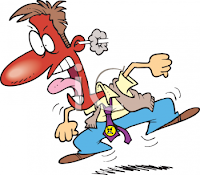 You have got to be kidding me!  I will not be paying this bill.  The tenant turned on the water and  has been using the water.  Either you personally will pay it, your company will, or you will find someone else to pay it because I'm not going to!
Clyde now became defensive.  Apparently, he never took the class that says in order to keep business you must keep your client happy and maybe offer to help find solutions.
Now wait just a minute.  This isn't my responsibility!
Oh Really??  (lots of words inserted here in very angry teacher tones) what are you going to do to fix the problem here?
Not sure how the entire exchange went, but I was MAD!  I had to take deep breaths and told him to call me when he resolved the situation.  No, I didn't make him cry (I have been known to do that to people on occasion) but I was very close!!
Honestly!  It was his mistake and he offered no help in the situation whatsoever!  Idiot!


Today, all of my bad feelings for him flew out the window because he is no longer working for the company.  I didn't get an explanation and frankly I don't need one.  The only reason I stuck it out with him is because I liked the company and thought maybe it would start to get better.  Although I like a good fight once in awhile, I am glad that he is DONE!!
property management