October 28, 2011
I think children are pretty amazing.  Yes, I know that I sometimes tell you all of the outrageous things they do and how they may drive you to drink, but they are amazing!

I am blessed to have each child that I have and I think it is awesome how each of my children came to me in a very different way.  Being that it is Tyce's birthday, I thought I would tell you about this miracle child! 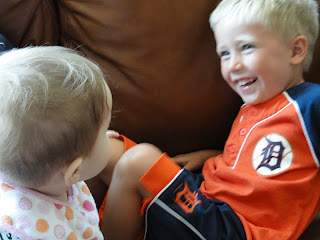 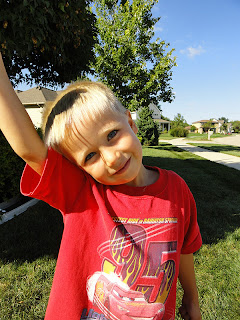 After Jackson was born, Ryan and I tried for about four years to get pregnant.  Believe me, we tried EVERYTHING!  If someone would have told me if I ran around naked clucking like a chicken for an hour and it would have resulted in a baby, I would have done it!

When we decided to adopt it was a decision we had already been praying about and discussing long before we became "infertile".  In fact, we both can clearly remember a conversation we had in our first year of marriage where we talked about adopting some children and having some biological children.  I believe strongly that this was God's plan for us, but I am a bit stubborn and want to do things my way and in my time so it just took a bit longer for me to listen!

We were getting ready to go meet Lola for the first time in Guatemala and getting everything ready for our trip.  There was a lot to get ready because we were leaving Jackson home so we had to prepare for him and bring clothes and anything we would need for a baby with us!

It was a Friday.  I had been working, came home, and was doing odds and ends before picking up Jackson.  Because we were going to Guatemala and going to the rain forest and would be out in the sunshine I thought that maybe I would like to go tanning that day.  As I was packing and going through things under my sink I found a pregnancy test from a long time ago.  Since I was "late" I thought I would just take the test.  I didn't figure I would need it anytime again anyways and I wanted to be responsible just in case. (you shouldn't tan if you are pregnant)  I actually attributed my being late to the fact that I was stressed about meeting my daughter for the first time in a foreign country.  It never crossed my mind that I could be pregnant!

It was the middle of the afternoon.  That line came up dark dark dark pink as fast as I could blink!  I must have stood with my mouth open staring at that thing for ten minutes!  I looked at the box and read the directions to be sure I had done it correctly!  Um, yes, I had been peeing on sticks almost every month for four years and I had to check that I was doing it right! ha! 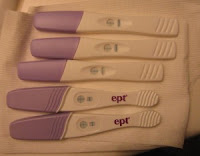 I actually cursed the stick out with a string of words that have never ever left my mouth before!  I shocked myself that I could even come up with that filth!  I hurled the cursed stick in the trash and looked back at the box.  Ok - here was the explanation.  The test had expired the month before!  That must be why it showed I was pregnant!  Just to be sure I raced to the drug store and no lie I bought four different tests!

I raced home in a daze and took one after another.  They all said the same thing.  I actually was in a panic.  This was not something I had expected!! EVER!  I called the doctor and the nurse said, "Congratulations!"  I said, "No.  You don't understand!  I was told this wouldn't happen unless I had surgery!  I am coming in for blood work and you will do a quantitative BETA and then I will come in on Monday and you will do it again and see if the numbers are increasing!"  The nurse most likely heard the panic in my voice and had me go out to the doctor's office right then.

I told the nurses exactly what tests to run on my blood work because I had been through it many times before and knew how to tell if the pregnancy was going to stick and how far along it was according to the numbers.

On Monday I went in again to have them take blood and the nurse called me at work.  I remember taking my cell phone and going into my speech room, which is semi-sound proof, to take the call.  The numbers were increasing!  I was in such shock that I had not even told Ryan!  I just couldn't believe it!  We were actually leaving to meet Lola the next day! 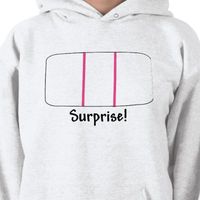 That night I wrapped up one of the sticks in a gift bag with a little poem to announce I was pregnant.  Ry was working late because it was tax time and we were leaving.  I gave him space and time to digest the news.  He walked into the living room and said, "Well, I guess you can go on Cobra for insurance."  My practical husband always thinking ahead!  I'm sure he was in shock too!

The next day we left for Guatemala with me being already six weeks pregnant!  We really didn't believe it would "stick" so I climbed all of the ruins and hiked and did everything I would have normally done!  Ironically, I was the only one of the people that we met in Guatemala who didn't get sick on that trip!

So, in every sense of the word, Tyce was/is my my miracle baby!

My story is a rare one.  Please don't tell people that now that they are adopting they will get pregnant. I know things like that are said without thought, but they are hurtful. Trying to build a family is a very difficult process for many people.  I cringe when people say that that is what always happens when people adopt.  I'm sure you have all heard of someones story where they adopted and then got pregnant.  I have to tell you, that those are the rare stories!  This does not always happen!  There are thousands of couples out there who tried for longer then we did and who have adopted and have never gotten pregnant or carried a baby to full term.  You don't hear about those stories because they are the norm and are sometimes hard to hear and tell.

We were very blessed in how God decided to build our family. I could have missed some of the painful parts, but all of those parts led me here which is where I am supposed to be and I couldn't be happier!