September 24, 2011
On our last day of our weekend adventure we stopped at Sleepy Bear Dunes.

The drive over was a nice one, passing many farms and beautiful homes.  Grand Traverse Bay was picture perfect and Glen Lake was a color blue I wasn't used to seeing reflected in Michigan lakes.


Our first stop was the Dune Climb.  The sun was bright, but not too hot that the sand would burn our toes.  The dune was big, but appeared doable as we stood at the base looking up at it.  Jackson and A took off on a run through the sand.  Lola and I went up at a slower pace, hand in hand.  Ryan sat with a sleepy Tyce at the bottom.  He didn't stay drowsy for long and was soon coaxing his father up the dune.

Once we reached the top, the view was breathtaking!  On one side we had a sparkling Glen Lake.
We were surrounded on our other three sides by dunes!  We continued to climb dune after dune.  We hiked up, hiked down, hiked up, and hiked up again.  The kids were excited to jump off the small cliffs and roll in the sand.  When we reached our third dune however, things weren't so hunky dorey.

The boys were thirsty.  I had on Lola's Barbie backpack which had water and a beach towel in it as I was trying to think ahead.  Obviously, I couldn't plan for every scenario that may present itself and that was the case this time!

Lola had to go to the bathroom. Surprise surprise!  We had just gone maybe fifteen minutes before, but when you are four and you have to go, you HAVE to GO!

I looked around us and all we could see was a sea of sand!  Flat open sand...  There was no where to hide a child peeing!  It was a Saturday so there were a lot of people around too!

We continued to forge our way through the sand hoping that at any moment we would spot an area of concealment!  When it was announced that it was "poopie" that was on its way, panic set in for Mommy and Daddy!  Now what?  There has to be some law against this!  Lola was beginning to become desperate.  Our only option was to high tail it off the trail over to some sparse beach grass and a small, short tree.

We sent the boys on ahead and huddled around Lola.  We made it just in time!  I felt like I was on Survivor as I instructed Ry that beach grass was not in fact the best suitable substitute for toilet paper!  Relief set in for everyone and we quickly left our spot off the trail and traveled over more dunes.

My goal was to make it far enough to see Lake Michigan.  After going up each dune I expected to see the glittering waters of the Lake each time, but it took many more dunes then I anticipated to see the Lake!  Jackson wanted to go all of the way to the Lake when we finally saw it and the Manitou Islands, but when I pointed out how little all of the people on the trail ahead of us appeared he conceded to heading back.

He and A took off on a run.  It warmed my heart to see the two boys interacting so much and having so much fun!  As they ran down the dunes you could hear their laughter carried by the wind.  The climb down was obviously much easier then the climb up and everyone made it down in one piece with a smile on their face! 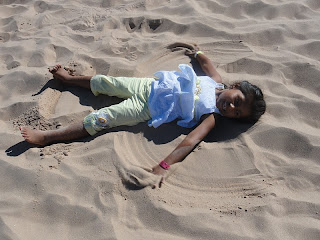 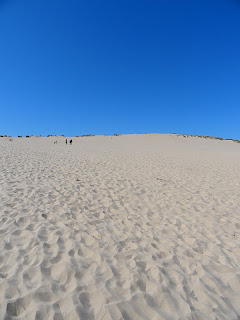 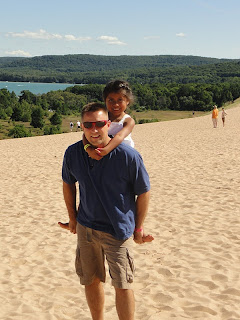 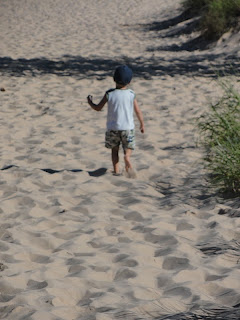 After emptying an entire sand dune out of the children's clothes, we climbed back in the car and zipped down the street to Pierce Stocking Scenic Drive.  This is a seven mile long road that winds its way through the dunes.  At the beginning of this one way road you get a guide that tells you all about the vegetation, different sights, and the dunes. 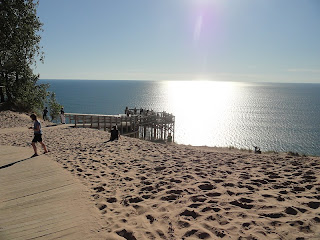 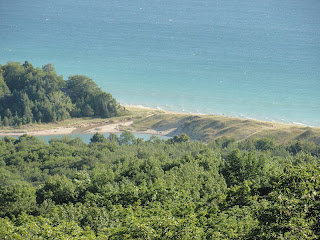 I loved all there was to see!  How Blessed we are to live in such a gorgeous state!  We even saw a doe and a fawn as we drove through the quiet woods.

After exploring the the Scenic Drive, we headed back to the expressway in the direction of home.  We again took many potty breaks and had one close call with you know who! 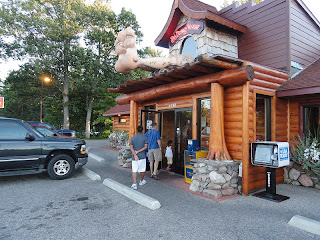 As it became dark, we stopped in Cadillac for dinner.  Ry picked out the establishment which ended up being Da Dawg House.  The outside didn't look all the appetizing to me, but the inside was decorated very fun and the food and service were good!  It was a fun place to stop and end our trip before pulling into our driveway and tucking everyone in!

It was such a fun adventure that we agreed we should do another weekend trip!  Now to find a free weekend!!
Cadillac Da Dawg House family vacation Manitou Islands Michigan travel Pierce Stocking Drive potty breaks Sleepy Bear Dunes travel in Michigan