September 06, 2011
﻿I have neglected my blog this past week.  It isn't that I don't have material because I seem to have something crazy and new to share daily if not hourly! :)  So I will be back at it tomorrow!  I was just treading water for the week.  At the beginning of the week I was just trying to focus on gathering pictures for the memorial of my grandpa (which I had a TON of!) and then I was focusing on the memorial itself.  Before I knew it, it was the weekend!
My parents asked me to speak at his memorial.  I joked that they asked me because they thought I was ice cold and wouldn't break down in front of everyone.  But I know it is because I am very much at ease in front of large groups and would relay what they wanted to express themselves.  (I really need to find a job where people will pay me to speak to large groups - I love it that much!!) I really thought that I could get through it without crying.  I practiced saying it probably 50 times to Jackson the day of the memorial.  The poor kid probably knew it by heart.  I should have gotten a clue that I wouldn't make it through without tears when it took about 20 tries to get through the last two paragraphs without choking on my words.  I walked around for the entire week with the worst sinus headache ever!  (due to holding back tears -or so I am told) At any rate, I did well at the beginning!  I made sure I didn't hug people because I knew I would cry.  I only sang a few of the hymns and I pretty much yelled, "Peas and carrots" in my head while the minister spoke.  I don't know why I yelled peas and carrots, it just was what came to me when I needed to block out what was going on around me.  I knew that if I listened to the message in the hymns and from the minister I would cry.  I knew once I started I wouldn't stop so I couldn't start! 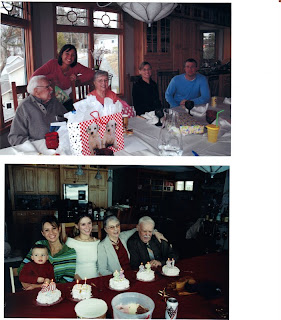 I had the audience engaged and people laughed when they were supposed to laugh and I saw a lot of smiles which is what Opa would have wanted.  He gave me a ton of material to work with and I could have been up there telling stories for a very long time!  When I spoke about what my kids would remember about Opa I lost it.  I couldn't say peas and carrots in the mic for fear of appearing crazy and the only thing I could think about was the last time my kids saw Opa.  It is a fantastic memory, but one that will make me cry each time I think of it.

We had stopped by just for an impromptu visit and the two little ones played with Opa and his phone.  That was a little game that Opa played with them.  One talked on the cell phone or home phone while Opa talked on the other phone to them.  It was super cute and they all were in giggles over it!  When it was time to leave I actually had to pry both of them off of Opa's lap because they kept running back to him for more hugs and kisses!  Such a simple little thing, but it is so telling of Opa's relationship with his family and our love for him.  I'm so glad that we can have that memory and even though I cried in front of a bunch of people, I'm glad I could tell how important Opa was to us and what a great man he was!  We were so blessed and continue to be!
death memorial service Opa