On Saturday we took advantage of the nice sunny day and I cashed in on the gift Ryan surprised me with last Christmas!  For a short time I became the pilot of an aircraft!

We went to Paramount Aviation which is a flight school and also offers airplane rentals.  Ry purchased a gift certificate for a flight lesson for me.  My flight even counts as airtime if I decide to get a pilot's license! 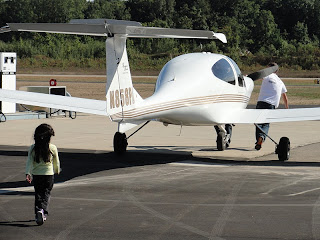 When we first went out on the runway, which is very tiny because it is not for commercial airplanes, I wondered about what I was doing!  The plane was very small!  It had room for four people and to get it into position John, my instructor, pulled it over!

He went through the entire checklist of things he was doing with our entire family and explained everything.  I, of course, had to ask how long he had been flying and when he responded to not let his baby face fool me, I had to laugh because Ryan gets stuff like that all of the time!  (By the way he has been flying since 1999.) 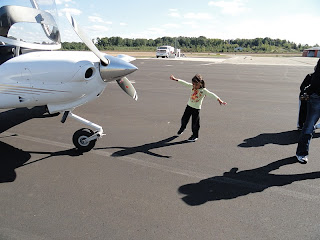 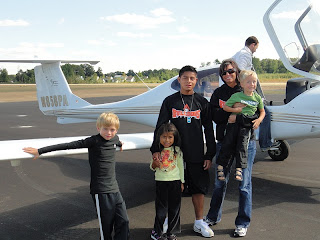 We decided that Lola and Jackson would fly with me.  Jackson asked why we were doing this and Ryan responded very truthfully, "Because this is what your mother does."  Tyce was not happy about not being included and begged to come along, but I was worried that he would be too antsy in the back with his siblings and there was no sitting on laps in the aircraft!

As John went through the list of things to check on the aircraft I noticed he had a manual with a long list of things to go through.  At first I felt a little on edge because wouldn't you know by now what you  needed to do?  He explained that each and every pilot has this list and goes through it each and every time they fly.  There are a lot of different instruments and things to check and you wouldn't want to be distracted and miss one! 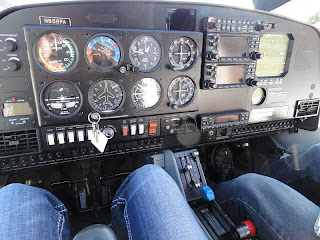 There is so much more to flying a plane then what you see in the movies!  Not to get to technical, but you have to watch all the instruments on your dash to determine wing position, direction headings, elevation, and more!  The choke is so sensitive that you have to hold it like you are holding a cup of tea.  If you grip it too tight you will create a very bumpy ride for yourself! 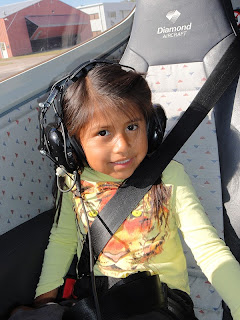 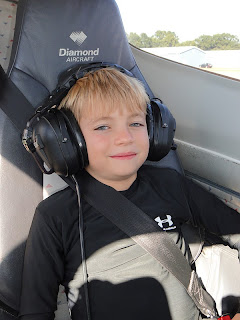 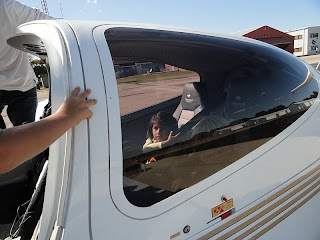 After we went through the entire list, talked about emergency procedures, and were all strapped in and headphoned up, we headed down the run way.  John explained exactly what to do to take off and I actually took the plane off of the ground on my own!  Those little planes lift off of the ground super fact!  It was very exhilarating and sooo sooo cool!

We decided to fly over our home and little town so I could take some pictures from the air.  The kids thought this was an awesome idea!  Lola was a little stressed, but was quickly comforted by her amazing brother who held her hand in the back!

In flying over downtown Grand Rapids it was a little bumpy.  It was explained to me that there is more heat in the city areas and that creates some currents and makes it a bit bumpy at times.  Maybe it was the feeling of being in control of the aircraft and being up front, but it didn't bother me at all!  We had a few drops that took my stomach away, but it only created a bigger feeling of fun!

After circling our small little town, seeing our house, the schools, and the other landmarks around us, I was given the controls for an extended amount of time!  I brought the aircraft west and then north and back again a few times.  It is not as easy as it sounds.  You have to watch the instruments to be sure you are keeping the wings at the right level and not turn too quickly.  Like I said before, one little nudge of that choke and you could be swinging around!  It definitely takes a gentle touch!  I guess I had it because while I was maneuvering the aircraft this way and that Lola actually fell asleep!

We spent an hour in the air and I have to say it was the most exciting plane ride I have ever had!  We were even able to see another plane land before taking our aircraft in for a landing.

What an awesome Christmas gift!  We had so much fun!  I'm just bummed that not everyone could go in the plane with me!  Maybe we can do it again!  I definitely am up for it!!  I would definitely recommend it to everyone!!!  So AWESOME!!  Thanks to my fabulous husband for coming up with the idea!  He ROCKS!! 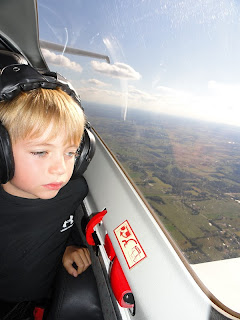 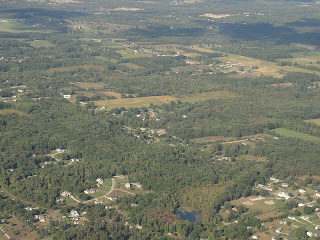