Take Me Out to the Ball Game!!

August 23, 2011
The white billowy clouds splatter the crisp blue sky making the lush green grass even more vibrant.  The crack of a bat sends the stark white baseball spinning through the vast.  It seems suspended in air and the crowd holds its breath to see if it will bounce off of the forgiving green or be swallowed up by the leather of the brown glove.  Waifs of popcorn, hot dogs, and beer touch the noses of the patrons and people put their arms up high in harmony with their neighbors as they make a wave travel around the stadium.  The music plays, the crowd cheers, and the flag waves.  What a wonderful All American pastime baseball is! 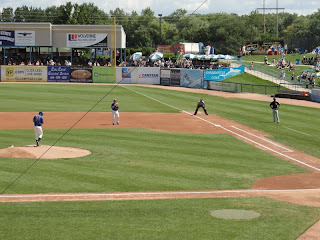 That is until my family ventures through the stadium gates.  The game is lost on every single child I have.

A sat very still and watched trying to comprehend the events of the field, but soon began drawing pictures and coloring with Jackson who was most concerned if he could get a souvenir like a giant finger or not. 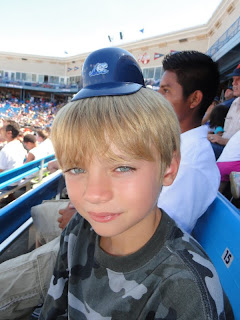 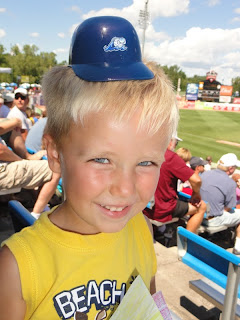 Tyce in typical fashion found a caterpillar crawling on the stairs which he desperately wanted to keep.  He then sat down and had to check out all of the people around him.  His first comment was,  "Momma, look at that BIG guy!  He has a lot of babies in his tummy!"  Just what you want your child to say about someone within hearing distance of you!  His next loud observation was, "Why is that guy wearing his bathing suit?"  (he had on shorts with a tropical print) "Are we going swimming?  Where is the water?"  My favorite comment of the day was, "Momma, where are the cows?"  The crowd was booing the umpire and he thought they were all mooing!!

Six sets of sticky fingers, three sets of ice cream stained clothes, and six sweaty people later we left the game having watched all seven innings and our team winning!  Lola still wanted cotton candy, Jackson was sad a foul ball never came to him, A wanted a shower, and Tyce was about to collapse from exhaustion, but I think they had fun????