August 08, 2011
After a fun day out in the sun, we headed back to the hotel to get ready for our evening events.  It was a black tie optional affair at Cal Neva.
Located on Crystal Point, overlooking Lake Tahoe, Cal Neva Resort Spa and Casino offers the perfect combination of peace and quiet paired with one of the world's most adventurous playgrounds. Once a secret haven for Frank Sinatra and his Rat Pack, San Francisco's upper crust, Hollywood's stars and international dignitaries, the Cal Neva Resort's mystique lives on and gives the hotel its distinction as a true Lake Tahoe classic. The original Lodge was built in 1926 by wealthy San Francisco businessman, Robert P. Sherman, who used the Lodge as a guesthouse for his friends and real estate clients.

It's amazing what you can do with words.  Reading the above excerpt from the Resort's website I get an entirely different picture then I did when actually stepping into the establishment.  Maybe it was the flashing lights from the slot machines, cigarette smoke, and non-stop noise that gave me a different impression then what is described above.  The purpose we used the venue for was perfect, but I don't know that it would be my first or second choice to stay.

The Cal Neva has a casino area as well as a kind of dinner theatre area.  We were lead to a room set with elegant tables facing a stage.  Marilyn Monroe and Dean Martin impersonators greeted us as the door.  When we were settled, a Frank Sinatra impersonator took the stage with his band.  The bass player was from Frank's actual band and played with him in that very spot for years!

We enjoyed a very tasty dinner with fun conversation.  They had put disposable cameras on the tables which I thought was one of the best parts of the evening!  Let's just say that some of the photos we took will not make it on the companies page, and if they do, there may be some trouble! (I am kind of an instigator that encourages silly behavior)

After dinner people got their dance on and we journeyed to the gambling area.  We were given pretend money to play.  We played Black Jack which I did fine at and then we went over to the Roulette table.  Shut the front door!  I rock at Roulette!  One of the guys next to me at the table was asked what his strategy was since he was doing so well.  He told them he just did what I did!  Honestly!  I won every time!  Ry and I were kind of the Ying and Yang of the Roulette table.  He lost all of our money and I won it all back plus some!  If it had been real money I don't know if I would have been as bold as I was with betting, but it was still loads of fun! 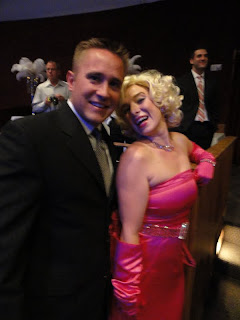