August 26, 2011
For the past three years Ryan and I have been taking Jackson to Michigan's Adventure for a fun day during the summer.  This year A was supposed to come with us, but he had soccer try-outs so he missed out on the fun.  Maybe next year!

Of course the day couldn't go without some fun adventures!

The first thing we always do is go to the waterpark and get a locker.  If you don't get there right away you won't get a space.  This way we can change our clothes when we are ready to go swim.

The first ride we hit was the corkscrew.  This is not the most ginormous ride and Jackson is big enough for it and I have been on it a ton of times.  Yet, standing and waiting in the line just makes my heart start to beat faster.  The longer we wait the more anxious I become!  Once I get on the coaster and go down that first drop I am fine and enjoy it, but it is close to torture for me to wait for it!

There were three of us so Jackson was going to sit by me and Ry was going to sit on his own.  We got in line so that we would be on the same coaster.  As we got closer to our turn, it turned out that we wouldn't be on the same ride afterall so I asked the lady  and her friend behind us if she would like to go first.  I wasn't prepared for her to start yelling that I was "totally screwing her over"!  She also wanted to ride on the same coaster as a friend who was down a few cars.  Ignoring her outburst, I then turned to a couple behind Ry and asked them if they would like to go ahead of me.  The lady then started to repeat over and over again how she was being "screwed"!  Awesome language when you are around a ton of kids!  Then she tried to push past me to be in front of the line.  I put my body in front of her to block her way and just shook my head.  She may have had 70 pounds on me, but I already had a ton of adrenalin pumping through my veins!  I wasn't about to let her separate me from my family!

There was a very simple solution to her problem.  I just didn't want to share it with her at that moment in time.  If her friends let one person in front of them, they would have been together.  Oh well.  As it turned out she went in front of us loudly letting me and everyone waiting know that I had "screwed" her over!  It made no difference to me!  We had a super fun time on our first ride!

We ventured over to the Scrambler and the Tilt-a-Whirl.  We had to post-pone our ride on the Tilt-a-Whirl because of someone's unfortunate willingness to share their lunch on the ride.  Jackson loves to ride these two over and over again and Ry can only stand so much spinning so it is up to me to have the gut of steel!

We hit most of the rides that Jackson could ride and wanted to ride.  One word of recommendation; if you are going to ride the wooden roller coasters - no matter what amusement park you go to and you are built like me, it may be a good idea to wear a sport's bra.  I'm just saying... Those rides are so bumpy and you get thrown all over the place and sometimes not all of your body is thrown at the same time or in the same direction!  It could be an added thrill for your companion rider, but why chance it! (let's just say I learned this one the hard way)

Toward the heat of the afternoon we journeyed to the water park.  Jackson's favorite is the wave pool.  Frankly, I am not a fan.  The place was packed and there were bodies everywhere!  The waves pushed everyone around and into one another.  I was super nervous trying to keep within arms reach of Jackson and out of the reach of the 50 people spilling over the wave in my direction!

I think our last wet ride was "Grand Rapids".  Do not ride this thing unless you really want to get wet!  It is not in the water park and you have to wear shoes on it so it is deceiving!  Mark my words, you will be completely drenched from your head to your shoes!  The first year we went on it I walked around the rest of the day making fun sloshing noises in my shoes.  (only amusing for the first four steps)  We wear our suits and flip flops on it now.  And of course I am the one that gets drenched each and every time.  I walk away looking like a drowned rat with running mascara!  I think that makes Jackson's entire day!  He belly laughs like nobody's business!  The best sound ever which is why I put myself through it time and time again!

Super fun time was had by all and we were spent!  Can't wait for next year!! 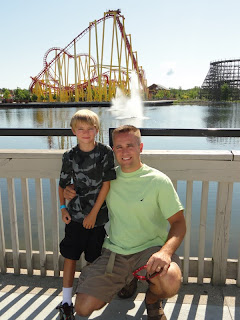 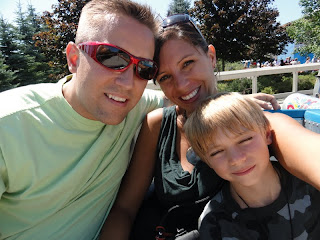 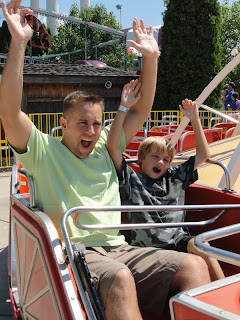 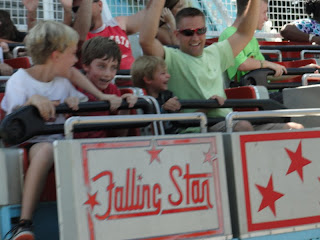 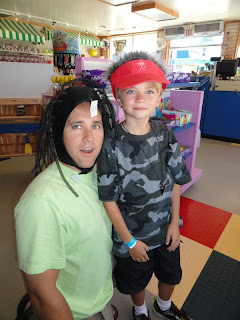 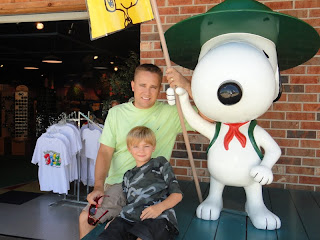 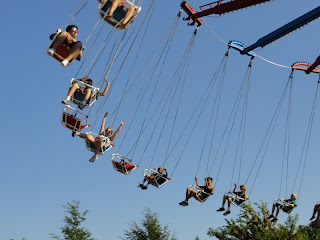 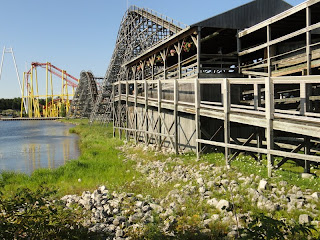 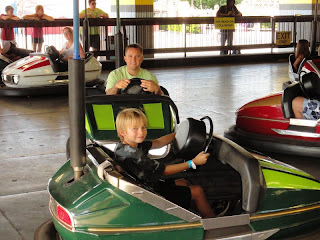