August 12, 2011
So yesterday's post covered the disappearance of A, my 16 year old and his friend, J when they were dropped off at the movies.  After being missing for 3 hours they showed up on our door step, a little sweaty and hungry, but fine.
I felt annoyed, relieved, and baffled all at the same time!  According to them, they waited for an hour just where I said they should and never saw me so they walked home!  Seriously, A made this girl who he is trying to woo walk almost 6 miles on a very hot day and he didn't even stop to get her water or food! (according to them...)
First, I can not figure out how Ryan and I both would not have seen them if they were where they said they waited.  I was there for 45 minutes in a minivan with my hazards on in front of the doors!! I even have a magnet on the side of my car advertising It Works!  You can't miss me!!  Ryan actually walked around the entrance!  My thought is that maybe my time and their time are not the same.  Neither one of them had a watch on so maybe standing outside for 10 minutes felt like 60 minutes.
Second, why not just call?  Why go through the trouble of walking all the way when they could have asked to use a phone?  Am I missing something here?  There are phones in every. single. store.  What person would tell a kid "No, you can't call your mom to pick you up."  It seems like common sense to me that they would have asked to use a phone.  However, they have not been brought up the way my other kids have where even the schools teach them what to do if they are lost.  They haven't had me quiz them about who they talk to and don't talk to and what they do if they are lost in a crowd, so maybe it isn't just common sense?
One thing is for sure, A now knows what to do if he is in that situation again!  I liked when Ryan said, "Even if we are late, we will never leave you."  Maybe he has been left before and he didn't know that.  I hope he does now!  I was ready to call in the National Guard to find him!  My goodness, Ryan was going to stop every movie in the theatre and search every face in there! 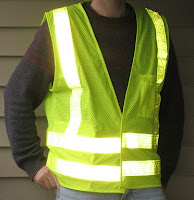 So, I walk away from this situation being a little bit wiser.  First, whether they like it or not, I am going to prep my kids for what to do just in case something happens.  I don't think I can remind them enough.  I know they will groan and say they know and have heard it a million times, but did they really listen?

Second, I think I will get a cheapy cell phone.  Ugh!  I hate to give in to the request for a cell phone, but I'm going to get one of those little things that you just pay for the minutes.  The kids can take it when they go somewhere so I can call them and they can call me for rides or whatever.

Third, I am going to get each of them a reflective vest with flashing lights so I can spot them in a crowd day or night.  Or a microchip with a GPS in it!  (I'm only semi-kidding about that!)  Finally, I am going to remember to hug them all no matter what!

Not sure if A appreciated all of the hugs he got when he finally showed up or in the morning when I again expressed how relieved I was that he was ok, but he'll have to learn to live with it!!
refugee foster care